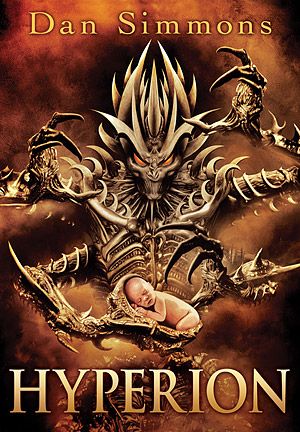 Subterranean Press is pleased to announce the signed limited edition of Dan Simmons’s classic space opera Hyperion. Fans will be thrilled to know that they plan limited editions for the subsequent three novels in the Hyperion Cantos, as well.

Their edition of Hyperion will be an oversize volume, printed on 80# Finch, with a dust jacket and full-color endsheets by John Picacio.

First published in 1989, Dan Simmons’s Hugo Award-winning Hyperion is one of the undisputed classics of modern science fiction. The opening movement of a hugely ambitious multi-volume epic, it is both a masterpiece of pure storytelling and a visionary meditation on the future development of the human race.

The narrative takes place some seven hundred years from now, at a time when humanity has left Old Earth behind and has begun to colonize the worlds between the stars. At a critical moment, with interstellar war about to begin, seven travelers are summoned to a pilgrimage on a distant planet called Hyperion, where ancient mysteries are taking on a new and sudden urgency. At the heart of these mysteries are the Time Tombs, enigmatic artifacts that appear to be traveling backward in time, and the savage, barbed creature known as the Shrike.

Included among these seven pilgrims are a soldier, a poet, a scholar, a priest, and a private detective. As they make their way toward their destination, they tell each other stories, transforming the novel into a far-future version of The Canterbury Tales. These varied, highly personal tales form the heart of this extraordinary book. Individually, they offer highly developed examples of narrative art. Collectively, they set the stage for the wonders, terrors, and revelations to come. The result is a remarkable—and durable—accomplishment that remains fresh and exciting more than two decades after its initial appearance. Hyperion, together with its successors, does what only the finest imaginative literature can do: It creates and populates a complex, extravagantly detailed universe more vivid, vital, and consistently enthralling than our own everyday world. Popular fiction just doesn’t get better than this.

Follow the links above for the specifics of each title

This is a unique one of a kind set, it is not Lettered or marked PC, each book is bound as a lettered book and each book is housed in a lettered  traycase BUT each are designated "Founder's Copy" on the limitation line. No other sets were designated in this manner, this is your chance to own the rarest and most unique Lettered State of this set of books.