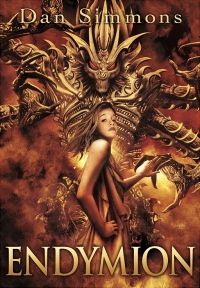 Set hundreds of years after the events recounted in The Fall of Hyperion, Endymion inaugurates a grand new narrative arc, one that explores the themes of The Hyperion Cantos in even greater depth and carries the story forward into a surprising—and thoroughly developed—future.

Endymion takes its title from John Keats’s poem about the love of a mortal man for an immortal goddess. By the time the novel begins, the Hegemony of Man has come to a spectacular end, the still dominant TechnoCore has disappeared from public view, and the once moribund Catholic Church has become the principle political power in the now scattered web of inhabited worlds. Against this backdrop, Simmons introduces two vitally important characters: Raul Endymion, convicted murderer and native of the planet Hyperion, and a twelve-year-old girl named Aenea, who is about to step through the Time Tombs and embark on a messianic destiny. Raul’s role is to protect her from the forces massed against her and to shepherd her toward her ultimate moment of apotheosis.

Endymion, together with its sequel, The Rise of Endymion, is a colorful, hugely ambitious narrative that also offers a revisionist view of earlier events—events we only thought we understood. Familiar characters—Father Lenar Hoyt, the poet Martin Silenus, the enigmatic and terrifying Shrike—appear in new and unexpected roles. Together with a host of vivid supporting characters and a vast array of brilliantly realized settings, they help set the stage for a memorable and visionary conclusion, while casting a new and sometimes startling light on all that has gone before.

Subterranean Press' edition of Endymion will be an oversize volume, printed on 80# Finch, with a dust jacket and full-color endsheets by John Picacio.