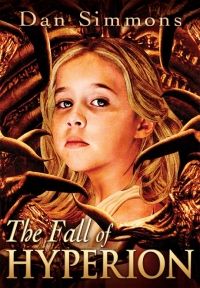 The Fall of Hyperion

The Fall of Hyperion is the second and final volume of Dan Simmons’s award winning Hyperion Cantos. By the time the novel begins, much of significance has already taken place. Interstellar war between the Hegemony of Man and the quasi-human Ousters has begun. The pilgrims making their way toward their confrontations with the Shrike have told their stories. And the identity of the rumored traitor within the pilgrims’ camp has been revealed. With these elements firmly in place, an extraordinary vision of the future is ready to unfold.

The story comes to us through the voice of Joseph Severn, an artificially created “cybrid” uniquely placed to describe every level of the narrative. Joseph sits in on the private war councils of Hegemony CEO Meina Gladstone while also maintaining a telepathic link with the pilgrims on Hyperion. Through these artfully shifting perspectives, we follow the individual destinies of a diverse group of characters, all of whom we have come to know in intimate detail. At the same time, we follow the larger, overarching destiny of mankind itself.

The Fall of Hyperion is both a grand, superbly written adventure and a work of great intellectual rigor. In the course of telling an enthralling story, it examines the problematic relationship between humanity and its own artificially intelligent creations, ponders complex questions of moral and ethical responsibility, and offers a visionary examination of the primal importance of empathy and love, qualities “as hardwired into the structure of the universe as gravity itself.” Like its predecessor, and like the two Endymion novels which would follow, The Fall of Hyperion delights, amazes, and enriches its readers at every turn. It is, and will remain, one of a major American writer’s most remarkable achievements.

To order a matching numbered set of Hyperion, Fall of Hyperion,Endymion and Rise of Endymion: click here to order