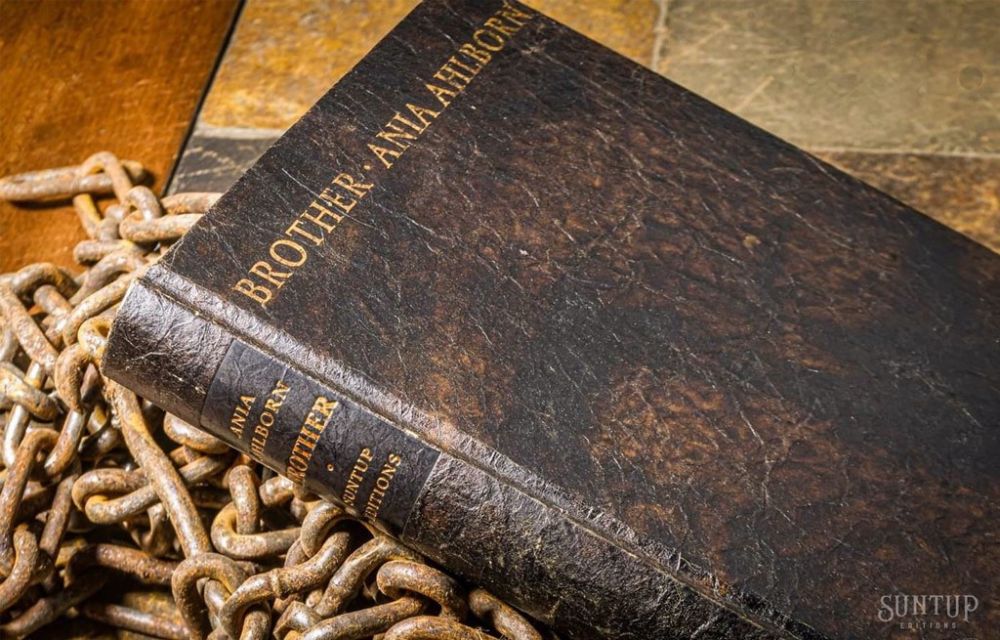 NOTE:  Purchasing this set from us does not carry any rights to future Suntup Editions publications

With a New Introduction by the Author

Brother is the terrifying tale of a family’s disturbing traditions, and of one brother’s determination to break free from all he has ever known. In a crooked farmhouse off the beaten path and miles away from civilization live the Morrows. A band of eccentric recluses, the family keeps to themselves so as not to be questioned by local police when girls go missing from the side of the highway. But nineteen-year-old Michael Morrow is different. He derives no pleasure in the screams that echo through the trees.

Michael pines for a life of normalcy and to see a world beyond that of West Virginia. In the nearby town of Dahlia, Michael meets Alice, a pretty girl working at a record shop. He is immediately smitten, but his family is all too eager to remind him of the monster he is.

Hailed by critics as “impossible to put down,” Ahlborn delivers all the guilt, guts, and gore of family drama as Michael fights to attain the life he longs for.

The signed limited edition of Brother by Ania Ahlborn is presented in two states, and is limited to five hundred and twenty-six copies. The edition measures 6¼” x 9¼” and features six full-color illustrations by World Fantasy Award winner Samuel Araya. Also included is a new introduction by Ania Ahlborn, and both editions are signed by the author and artist. This is the first signed limited edition of the novel, and the first time it is issued in hardcover. All copies ship with a Brother bookmark.

Limited:  500 copies is bound in Indiana Walnut handmade paper by paper and print artist Andrea Peterson. This unique archival paper is made from a 100% cotton rag sheet that has been coated with a black walnut dye from the artist’s trees on her homestead. The sheets are crumpled to soften, brush dyed and finally coated with a thin layer of shellac to seal the walnut. Endsheets are Hahnemühle Bugra and the cover features two hits of foil stamping. The book is housed in a cloth slipcase.

Note: Purchasing a stand alone copy of Brother will not give you any rights to a matching numbered Seed.

Note: Seed is only available from us along with a matching copy of Brother (individual copies of Brother previously sold by us have no rights to a copy of Seed as we believe all the additional copies we had were numbered above 350 or were not part of our normal wholesale allotment.)  Seed will be shipped when published or we can hold the Bother and ship both at once, purchaser is responsible for shipping.  We do not have any individual copies of Seed available except for those customers who have arranged to purchase all Suntup titles from us.

As a young boy, Jack Winter fled his rural roots in Georgia, vowing to never look back. Years later, the new life he has built is threatened by a sinister presence that looms dead ahead. When Jack, his wife Aimee, and their two small children survive a near fatal car accident, six-year-old Charlie starts to change, taking on a new and frightening personality. Aimee struggles to understand what is happening to her little girl, but Jack already knows: the horror that once came to him as a child has found him again.

Seed was originally self-published by Ania Ahlborn on July 17, 2012. It clawed its way up to the #1 spot on Amazon’s horror chart, earning her a multi-book deal and a legion of readers. This is the first signed limited edition of the novel.

Reminiscent of such classics as The Exorcist and The Bad Seed, Ania Ahlborn’s page-turning terror is atmospheric and brutal, with a poetic narrative that holds you in a vice grip and doesn’t let go.

Limited The Numbered edition of 350 copies is a quarter cloth flatback binding with Indiana Corn handmade paper boards. This unique archival paper is made from 100% corn stalk and leaf. The cover is foil stamped, and the endsheets are Hahnemühle Ingress. The edition is printed offset on Cougar Natural and is housed in an embossed paper covered slipcase.