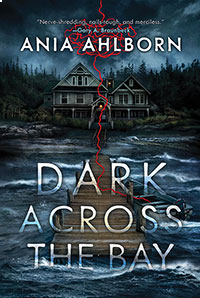 Dark Across the Bay

In the vein of John MacDonald’s Cape Fear, Ahlborn takes the classic stalker tale and updates it for the modern era.

The house sits stoic and slightly askew off the coast of Raven’s Head. Its off-kilter windows are both charming and disorienting, its walls of overstuffed bookshelves both comforting and claustrophobic. When Leo and Lark Parrish arrive at their vacation home with their parents, their mother’s idea of a quintessential Maine getaway seems like both a blessing and a curse. Lark—a novice novelist—can’t wait to find inspiration at the end of a fog-entombed pier. She’ll forgive her mother for forcing her into this non-negotiable holiday, but only if she can find her muse among a lapping, rocky shore. And while being trapped in a house with no means of escape is the last thing Leo would consider a good time—especially with parents on the precipice of divorce—he can’t help but wonder if maybe the change of scenery will help him shake off the chains of sadness brought on by the death of his closest friend.

But what starts off as a relatively benign family trip quickly turns menacing. Leo finds himself face-to-face with what feels like his best friend reaching out from beyond the grave, and only hours after they arrive, Lark begins to receive sinister texts. And then they both see it: someone lurking in the shadows of their rental home. Someone who has been expecting them despite the Parrishes being a thousand miles from home.

Limited to 500 signed, by Ania Ahlborn and Josh Malerman, and numbered copies