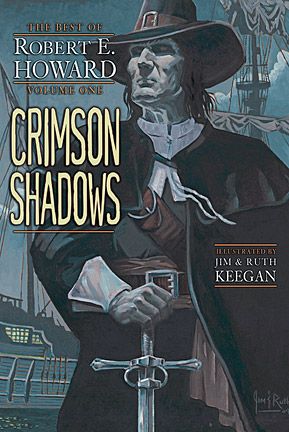 The Best of Robert E. Howard, Volume One: Crimson Shadows

Illustrated by Jim and Ruth Keegan

Subterranean Press is proud to continue this series of limited editions, beginning with Kull: Exile of Atlantis, exquisitely illustrated with color plates and black and white illustrations illuminating the text. We now continue with our second offering, Crimson Shadows, The Best of Robert E. Howard, volume one. We plan to match or better the quality of materials used in the Wandering Star editions, and will be doing a number of other books in the series.

To all of them he brought his gift for exciting, fast-paced action and a poetic economy of language. The two volumes in The Best of Robert E. Howard bring together the most outstanding of his tales, enabling both long-time fans and new readers alike to sample the varied repertoire of “the greatest pulp writer in the whole wide world.”

Limited to 750 numbered copies, signed by the artists

Limited to 750 numbered copies, signed by the artists - no slipcase - Bill's copy

We have matching numbered sets of the three Howard titles produced by Subterranean Press, these include: