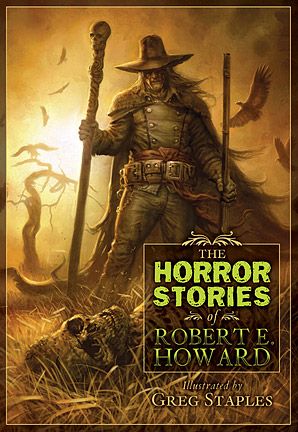 Subterranean Press is proud to continue this series of limited editions, beginning with Kull: Exile of Atlantis, exquisitely illustrated with color plates and black and white illustrations illuminating the text. They now continue with their third offering, The Horror Stories of Robert E. Howard,. They plan to match or better the quality of materials used in the Wandering Star editions, and will be doing a number of other books in the series.

Robert E. Howard is best known as the father of “sword and sorcery” fiction, an exciting blend of swashbuckling action and supernatural horror epitomized by his characters King Kull, barbarian usurper of the throne of fabled Valusia, and Conan, who wanders the Hyborian Age “to tread the jeweled thrones of the Earth under his sandalled feet.”

But the young Texas author was far more gifted and versatile than many readers know: in a career that lasted only twelve years before his untimely death, he wrote some 300 stories and 800 poems, covering anastonishing variety of subject matter—fantasy, boxing, westerns, horror, adventure, historical, detective, spicy, even confessions—running the gamut from dark fantasy to broad humor, from brooding horror to gentle love story.

Important note: The Subterranean Press edition of The Horror Stories of Robert E. Howard will include a number of never before published full-color plates.

Limited to 750 numbered copies, signed by the artist

We have matching numbered sets of the three Howard titles produced by Subterranean Press, these include (you can click on the title for more information):