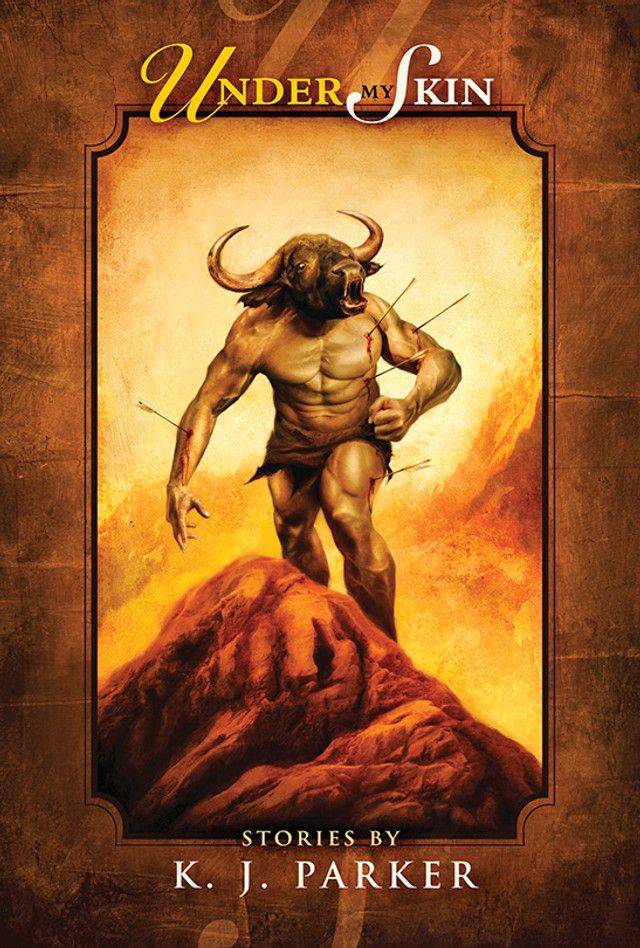 -anyone who reads the right book has an ally

Here is the right book. Under My Skin, K.J. Parker’s superb new collection, includes almost 700 pages of novelettes and novellas, some appearing here for the first time anywhere, with one completely new novel-length tale, Relics.

These stories are everything readers have come to expect from Parker, populated by con men and kings, magicians who don’t do magic and messiahs who don’t offer redemption, by holy men and holy fools. But be warned, not only is all perhaps not what it seems, all can usually be counted on to not be what it seems. Parker’s unruly and unreliable narrators, who sometimes fool themselves even more than they fool us, stride along muddy paths through lonely hills or across marble floors in grand palaces, always finding trapdoors opening beneath them.

In “The Thought That Counts,” for example, a man who claims to have been magically granted the wisdom of the world finds that he’s not wise enough to recognize a figure from his past who may prove that wisdom isn’t enough in every situation. In My Beautiful Life, a man who starts life as the son of a village prostitute rises as high in his world as anyone can, only to find that tumbling from such a height makes for a long, long fall. And in the epistolary novel Relics, readers are offered not just one unreliable narrator but two, as an archduke and a relic hunter describe their highs and lows to one another in a series of missives that even the writers don’t necessarily fully believe, much less the recipients.

K.J. Parker first came to prominence with The Engineer Trilogy. Since then, the author has gone on to pen dozens of novels, novellas, and short stories, winning a couple of World Fantasy Awards along the way and earning legions of fans. Subterranean Press is proud to offer this third collection from a modern master, a true ally guiding us through an uncertain—but endlessly fascinating—world.