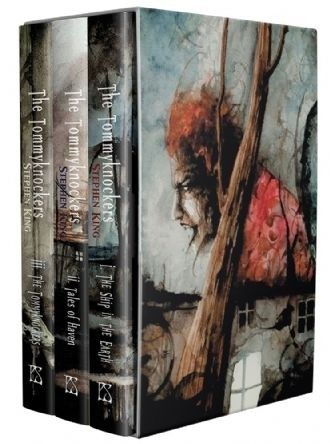 Late last night and the night before,

knocking at my door.

‘cause I’m so afraid

of the Tommyknocker man.

It begins with nothing more frightening than a nursery rhyme; yet in Stephen King’s hands it becomes an unforgettable parable of dread, a threat from an unimaginable darkness that drags the practical inhabitants of a New England village into a hell worse than their own most horrible nightmares…and yours.

It begins with a writer named Roberta Anderson, looking for firewood in the forest that stretches behind her house. Bobbi stumbles over three inches of metal, which unusually heavy spring runoff has left sticking out of the soil. A logger’s beer can, she thinks at first, but “the metal was as solid as mother-rock.”

It begins with Bobbi’s discovery of the ship in the earth, a ship buried for millions of years, but still vibrating faintly, still humming with some sort of life…faint…weak…but still better left alone.

Bobbi then begins to dig—tentatively at first, then compulsively—and is joined by her old friend (and onetime lover) Jim Gardener. Aided by a weirdly advanced technology, their excavation proceeds apace. And as they uncover more and more of an artifact both familiar and so unbelievable it is almost beyond comprehension, the inhabitants of Haven start to change.

There is the new hot-water heater in Bobbi’s basement—a hot-water heater that apparently runs on flashlight batteries. The vengeful housewife who learns of her husband’s affair…from a picture of Jesus on top of her TV, a picture that begins to talk. Not to mention the ten-year-old magician who makes his little brother disappear…for real.

The townspeople of Haven are “becoming”—being welded into one organic, homicidal, and fearsomely brilliant entity in fatal thrall to the Tommyknockers.

In this riveting, nightmarish story, Stephen King has given us his tautest, most terrifying novel to date. And the next time someone raps at your door, you may want to keep the chain on. It just might be the Tommyknocker Man.