In 1633 all of Herbert's English poems were published in The Temple: Sacred Poems and Private Ejaculations, with a preface by Nicholas Ferrar. The book went through eleven editions by 1695 and The Temple has become the best-known religious poem in the English language. The Temple, actually a sequence of poems, imitate the architectural style of churches through both the meaning of the words and their visual layout. The themes of God and love are treated by Herbert as psychological forces as much asmetaphysical phenomena. Herbert's poetry is at once personal and confessional. His poems about the Eucharist and holy baptism are not only general theological explorations of the sacraments but also the poet's expression of the struggles of his own flesh to be reconciled to God.

Not something we would normally offer, but on the other hand probably the rarest, most valuable title we have ever had the opportunity to offer to our clients.  This book has been in print for almost 400 years!  Today it is even available as an e-book.  We offer here a RARE, first edition, of this significant book.

A search of this book will show most copies are in the hands of libraries, in special collections, not in private hands.  In fact, we were able to find only two first editions for sale, priced at $16,000 and $20,000 and one second edition, printed in the same year as the first for $15,750.

Now about our copy:

Bound in leather, the pages are well yellowed and passages are underlined and notes written in the margins.  There is a note written in the back which states "3 leaves from another copy : 93, A3 and A10 upper outer corner of leaves E2-4 defective?" by defective, they are damaged, chipped.  Honestly as far as the three replaced leaves, I'd never be able to tell by looking.  The name "Elis Doro Peyton" is handwritten at the top of the title page, which clearly shows that it is a first edition, lacking any later edition information on the title page. 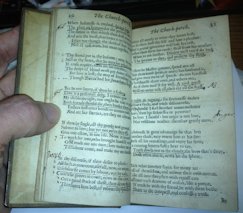