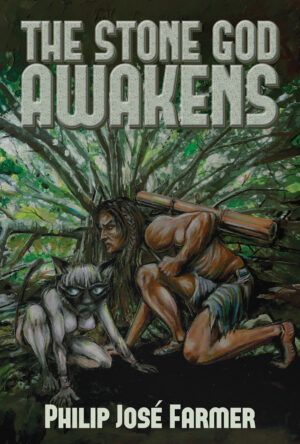 Twentieth-century scientist Ulysses Singing Bear had no idea his experiments with atomic stasis would result in a twenty-million-year journey to a world peopled by the descendants of present-day mammals. It was the world of Awina, the cat-woman who impossibly loved Ulysses. It was the planet of the mammoth continent-spanning intelligence—The Tree, whose branches touched the heavens and whose roots clasped hell—who knew that Ulysses, the newly-awakened Stone God, could destroy his reign.

To enable his species to survive, Ulysses had to find a human mate. To do so, and to fulfill the single condition set by his worshippers, he had to confront The Tree. It would have been an easy task for a god, but he was only a man—and the only man at that…

Originally published as an ACE paperback in 1970, The Stone God Awakens has been reprinted numerous times throughout the ’70s and into the ’80s, but is still one of Philip José Farmer’s lesser-known works. And that is a shame because, as Danny Adams (co-author with Philip José Farmer of The City Beyond Play and Dayworld: A Hole in Wednesday) spells out in his introduction, it is “a breathless mix of adventure, intellect, and myth.”