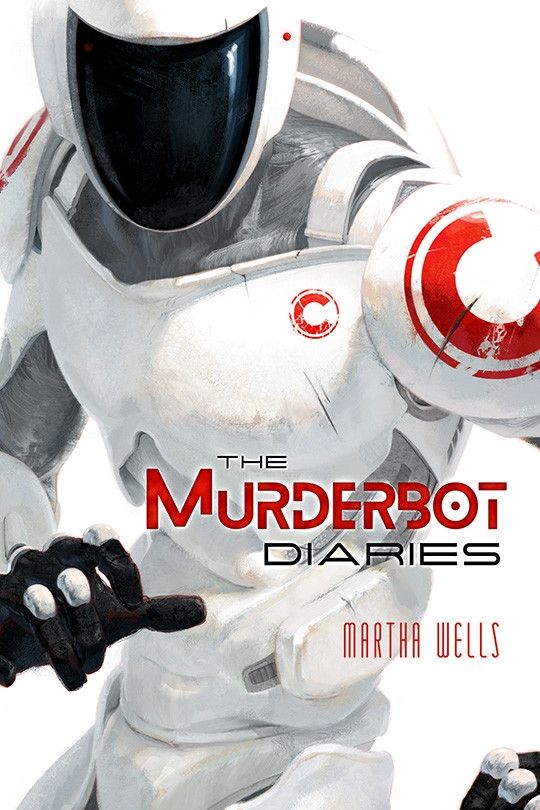 The Murderbot Diaries and Network Effect

Subterranean Press is pleased to present The Murderbot Diaries, which includes the four novellas and a bonus short story about Martha Wells’ singular creation, appearing for the first time in one volume. This limited edition will be printed in two colors, on 80# Finch, the paper we use for higher end limited editions. The dust jacket will be printed on Mohawk.

SubPress favorite Tommy Arnold has contributed a full-color dust jacket, black-and-white endpapers, and a full-page black-and-white-illustration for each story.

Designed for duty and destined for adventure, the secretly autonomous cyborg SecUnit with the self-awarded nom de guerre Murderbot really just wants to access media feeds and leave its human charges to their own devices. Unfortunately, Murderbot’s days of high-bandwidth soap opera viewing come to an end when an alien creature attacks the off world expedition it is assigned to guard. Here begins the award-winning and instantly beloved series The Murderbot Diaries, in which Murderbot investigates its own past and present, and ultimately rises to meet a threat to its former owner—and possibly friend—Dr. Mensah.

With Murderbot, New York Times bestselling author Martha Wells has created one of the most engaging characters to emerge from science fiction in decades. Witty observations, troubling memories, a sardonic voice, and the rendering of action-packed combat sequences with élan and panache combine for a virtuoso performance in all four of the novellas collected here: All Systems Red, Artificial Condition, Rogue Protocol, and Exit Strategy. This collection also includes an original short story appearing in print for the first time, “Home: Habitat Range Niche Territory.”

Across alien environments, corporate intrigue, and high tech adventure that reinvents and reenergizes genre staples like aliens, powered combat armor, and spaceships, Wells exhibits her mastery over an entire subgenre that stretches all the way back to Mary Shelley’s Frankenstein, the awakening into independence of an artificial being created by humans.

The Murderbot Diaries have earned Wells rave reviews around the world, as well as Hugo, Nebula, and Locus Awards. But, most important of all, they’ve earned a legion of devoted and delighted fans.

Everyone’s favorite security unit Murderbot would much rather be watching new episodes of Lineages of the Sun, but is burdened, as usual, with clients who don’t trust their SecUnit’s situation assessment. And the situation in Network Effect, the first full-length novel in Martha Wells’ acclaimed Murderbot Diaries, quickly becomes dire.

It’s hardly Murderbot’s fault that its human employers are captured in, shall we say, heightened circumstances, but, of course, it falls to Murderbot to save the day. Again. And then a third party from its past enters the picture, also in desperate need of help. Will Murderbot never get a break?

Wells’ creation has amassed a devoted legion of fans whose minds were blown--figuratively--by the first four novella-length entries, which featured antagonists whose minds were blown--literally. Here readers will find a continuing masterful reinvention of the science fiction adventure story, with healthy doses of sardonic humor, high stakes interpersonal relationships, and some of the wittiest introspection to be found anywhere.

The Murderbot Diaries have been bestsellers and have won the coveted Hugo, Nebula, and Locus Awards. Now, in Network Effect, an instant New York Times bestseller, Wells takes things even further, shakes things up even more. This is a story that will satisfy both readers who’ve been along for the ride from the beginning, and those just jumping onboard the runaway space freighter that is the life of Murderbot.

Purchase of a Lettered Copy must be made via wire tranfer (Bank Transfer, yes, even if putting on layaway), Layaway is available for this item, both our copy and the consignment copy.