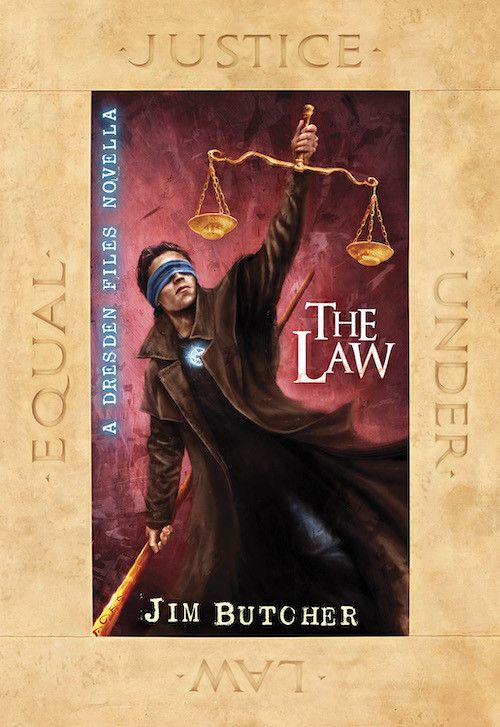 Subterranean Press is pleased to announce an original Dresden Files novella by Jim Butcher, featuring a full-color dust jacket and four full-color interior illustrations by Vincent Chong. Theirs is the only print edition currently planned.

The Law, though, in no way recounts the quiet period of reflection that Harry needs, no matter how much he deserves such. Taking on what at first seems to be a much smaller case than any he’s worked in years, the world’s only consulting wizard soon finds himself facing enemies far more powerful than the “invincibly stupid” pimp his client is meeting in court. And not the Unseelie Court or any of the other supernatural governing bodies Harry is used to dealing with, but a “real life” court of law in magic-wrecked Chicago.

The pimp, it turns out, is a minion of an old enemy and erstwhile ally of Harry’s and is thus under potent magical protection. Through a series of literally explosive events, Harry must depend on the cooperation and help of friends, enemies, queens, demigods, and even apparently everyday denizens of Chicago, such as one lawyer who may be more than he seems, and another who is definitely more than he seems.

Used to taking worldly and supernatural laws into his own hands, in this novella Harry’s potent abilities may not prove to be enough to right a simple wrong. Instead, he must depend on his canniness, his wits, and his friends if he wants to see justice done.

The Law is the latest entry in Jim Butcher’s Hugo-nominated Dresden Files, which have been thrilling readers for over twenty years. The series of novels and other novellas describe a secret world behind our own, one that threatens reality at every turn, but which at every turn finds a staunch defender: Harry Dresden.