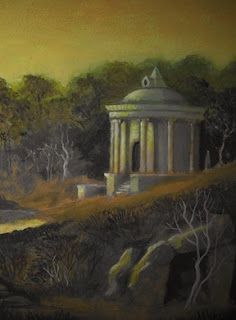 The Ghost & Scholars Book of Follies and Grottoes

Sarob Press is spookily delighted to present thirteen eerie spectral tales (eight are wholly original to this volume) where the authors have taken, as inspiration, the theme of follies and grottoes. In her introduction Rosemary Pardoe tells us: ‘Follies may be fake temples, belvederes, pyramids, obelisks and towers, sham castles and ruins, eyecatchers, faux druid circles and hermitages (with or without fake hermit!), and many other things besides. Folly grottoes are often cut out of rock, and decorated, frequently with shells (such as the one at Margate, which is famously often claimed to be genuinely pre-Christian).’

And the dark and ghostly stories ... ‘range widely, from mysterious towers and classical temples to hidden grottoes; from revivals of the worship of ancient gods to unexpected distortions of space and time’.

All five of the previous Sarob Press (and Rosemary Pardoe edited) Ghosts & Scholars anthologies sold out very quickly … so get your order in early to avoid disappointment as this one will, surely, quickly go the way of the others.