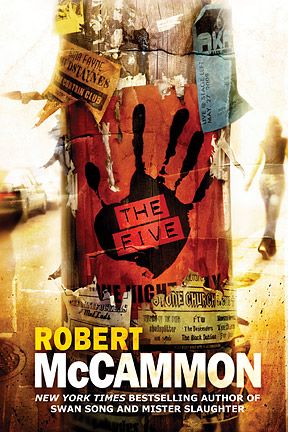 Subterranean Press is proud to present Robert McCammon’s first contemporary novel in nearly two decades, a tale of the hunt and unlikely survival, of the life and soul, set against a supernatural backbeat.

Robert McCammon, author of the popular Matthew Corbett historical thrillers (Speaks the Nightbird, Mister Slaughter), now gives us something new and completely unexpected: The Five, a contemporary novel as vivid, timely, and compelling as anything he has written to date.

The Five tells the story of an eponymous rock band struggling to survive on the margins of the music business. As they move through the American Southwest on what might be their final tour together, the band members come to the attention of a damaged Iraq war veteran, and their lives are changed forever.

The narrative that follows is a riveting account of violence, terror, and pursuit set against a credible, immensely detailed rock and roll backdrop. It is also a moving meditation on loyalty and friendship, on the nature and importance of families—those we are born into and those we create for ourselves—and on the redemptive power of the creative spirit. Written with wit, elegance, and passionate conviction, The Five lays claim to new imaginative territory, and reaffirms McCammon’s position as one of the finest, most unpredictable storytellers of our time.

Trade: Fully cloth bound hardcover edition AND they are flatsigned by Mr. McCammon!

Limited to 274 signed and numbered copies, in slipcase, including several color plates not in the trade hardcover and sold out pre-publication