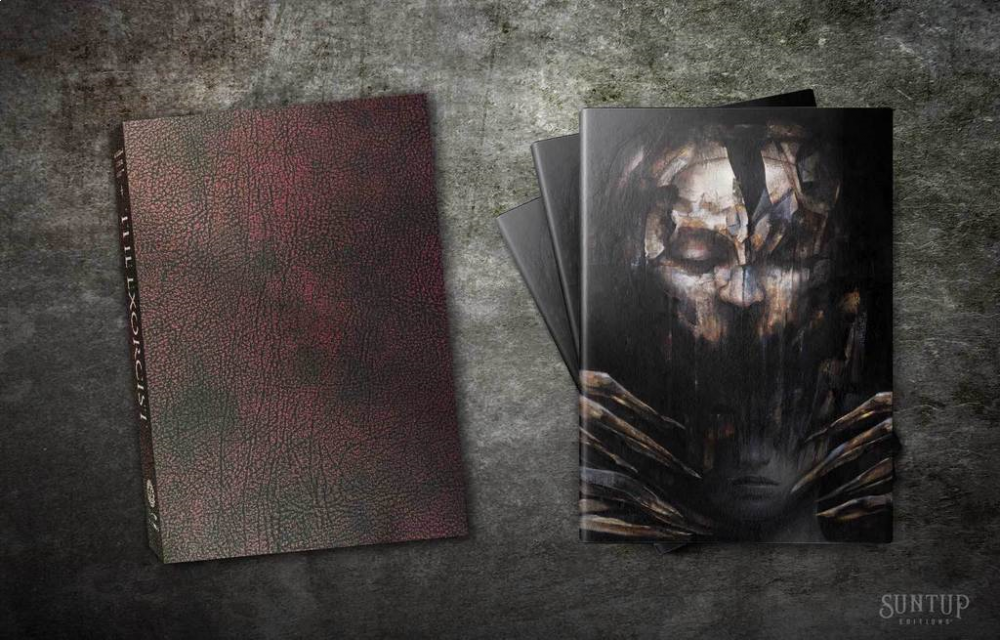 In celebration of the 50th anniversary of this iconic masterpiece of horror and paranormal suspense, Suntup Editions is delighted to announce a fine press limited edition of The Exorcist by William Peter Blatty. One of the most controversial novels ever written, The Exorcist was first published in June 1971, and would go on to become a cultural phenomenon. The book spent fifty-seven weeks on the New York Times bestseller list, seventeen consecutively at #1. Five decades later, the novel retains its power to possess readers with its raw and visceral prose.

Inspired by a 1949 article in The Washington Post in which a Catholic priest recounts his experience performing the ritual of exorcism on a young child, William Peter Blatty's groundbreaking novel details the demonic possession of eleven-year-old Regan MacNeil. When neither medical professionals nor psychiatrists can come to Regan's aid, her mother enlists the assistance of two priests. Overwhelmed but determined, they endeavor to rescue Regan from an unspeakable fate. To do so, they must face a series of terrifying moments that will test not only their strength, but the very core of their faith.

Two years after its publication, The Exorcist, was adapted for the screen by Blatty. The film, directed by William Friedkin, who has penned an exclusive introduction for this edition of the novel, would become a wildly successful motion picture, garnering ten Academy Award nominations.

On September 27, 2011, The Exorcist was re-released as a 40th Anniversary Edition in hardcover, paperback and audiobook featuring new and revised material. Of this edition, Blatty wrote: "This will have a touch of new material in it as part of an all-around polish of the dialogue and prose. First time around I never had the time (meaning the funds) to do a second draft, and this, finally, is it. With forty years to think about it, a few little changes were inevitable — plus one new character in a totally new, very spooky scene. This is the version I would like to be remembered for." Suntup Editions is very pleased to publish this version; the author’s preferred text in our fine press edition of The Exorcist.

The Numbered edition of 250 copies is a handmade lapped component case binding constructed from purple and black Japanese cloth covers and purple folded single folio endsheets. It features foil stamped titling at the spine, a white Plike paper collar, flush mounted and wrapped at the head of the book, and is housed in a cigar-style enclosure covered in Japanese cloth. The edition is printed letterpress on Mohawk Via Vellum and is signed by William Friedkin and Marc Potts. Each copy of this edition is sewn and bound by hand.