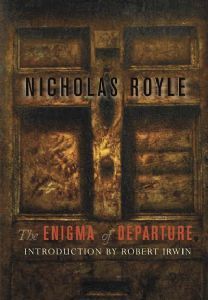 The Enigma of Departure

"I followed Henry James's advice and approached Venice from the sea, taking the Alilaguna boat from Marco Polo Airport to the Piazza San Marco. There were quicker ways to get to the hotel, but I was travelling light and preferred to walk. I wanted to feel in control again, having had to surrender that privilege on the flight. As I walked, though, I soon remembered that Venice is a city that constantly surprises you. Once you leave the main routes, the map is almost impossible to follow and you have to trust to instinct and your sense of direction, both of which are compromised the moment you cross a bridge and start following the line of the canal. WC Fields was right about water. It is not to be trusted.

"Disoriented, you hunt for clues in the city's myriad smells – salt, fish, damp, frying onions, rotting algae – but each one is a false scent. Your head spins at every sudden new sound, but the acoustics are a cacophony of random deceptions. The Rite of Spring reinterpreted by Steve Reich.

"Control, in Venice, was an illusion. It was the ideal location, I realised, for one of Mike Nelson's architectural installations, in which nothing was what it seemed and everything was in question."

The Enigma of Departure: Nicholas Royle's superb new novella is a dazzling, unsettling exploration of the labyrinths of memory and the depths of obsession.

Lettered It is our understanding that PS Publishing sold 26 lifetime subscriptions, as a perk of that subscription the purchaser would receive a copy of the signed state of a particular book but instead of a number in the limitation line, it would contain a letter, each subscriber was assigned a letter, in all other aspects the book is identical to the "Limited" copy.