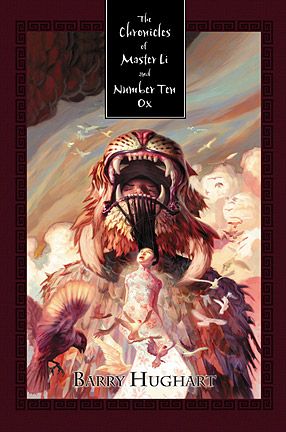 The Chronicles of Master Li and Number Ten Ox

A discussion about favorite writers who have made large impressions with relatively small bodies of work sprang up over at John Scalzi's Whatever recently, and it reminded us of some wonderful books, including Emergence by David R. Palmer, and the three novels that make up The Chronicles of Master Li and Number Ten Ox by Barry Hughart. As it turns out, two of Mr. Hughart's novels are still available singly, but the omnibus version will now set you back in excess of $150 -- and that's just for the book club edition.

Our trade edition from a few years ago will set you back $150+ for a fine copy, so we've decided to make this omnibus available again to Mr. Hughart's many fans. In addition, we've proofed the book anew to root out some typos that crept into the previous printing. If you're a fan, you'll want to get your order in soon, because we the first 200 or so copies of the new printing are signed by the author on a special tip-in sheet.

For those of you unfamiliar with Mr. Hughart's singular creation, they're tales of a China that never was, with Master Li in a Holmesian role, and Number Ten Ox his attendant Watson. The books are an unmitigated joy on every level.

When I got out of Andover in the 1950s I suffered from fairly severe depression, but this was back when the only such term recognized by the medical profession was “depressive” following “manic” which was one bad gig until some genius renamed it “bipolar disorder” and after that it couldn’t harm a fly. Since I wasn’t lucky enough to qualify for manic and clinical depression didn’t exist they diagnosed schizophrenia and packed me off to a booby hatch. (Which was not entirely a bad thing. Man, the scene at Kings Count Psychotic Ward was like awesome!) Then I was promoted to a slightly less odorous asylum where Doctor Oscar Diethelm expounded upon the delights of going snickety-snick on my frontal lobes, and while it would take too long to explain I managed to escape to Columbia University. There I found myself groping through weird landscapes obscured by clouds of pot behind which pimpled prophets of the Beat Generation shrieked, “Our minds destroyed by madness, starving, hysterical, naked, dragging through black streets at dawn looking for an angry fix, or what the fuck, something like that. Yo, daddy-o!” and I said to myself, “Barry, you have found a home.”

When I wafted back into the world a few years later my depression was still there but I was allowed to prove my sanity by blowing things up for the U.S. Air Force. No, not Vietnam. Planting ingenious and mostly illegal mine fields around the eternal DMZ in Korea. Time passed but not much else. I moved to the Arizona/Sonoran Desert where I could live quietly, surrounded on all sides by prickly pear, cat’s claw, devil’s horns, barrel cactus, jumping cactus, and illegal immigrants. I still occasionally dreamed of bright flashes followed by BOOM! which was a shame because I had other memories of the Far East: good memories, warm memories, and in 1977—ten years before Prozac—I decided to use those and whatever else I could come up with to create an alternate world into which I could creep on dark and stormy nights and pull over my head like a security blanket. So I read a lot and scribbled a lot and gradually the land of Li Kao began to take shape. But the first draft of Bridge of Birds didn’t really work and I couldn’t see what was wrong, so I dumped it into a drawer for a few years. Then one day I read Lin Yutang’s The Importance of Understanding and found the prayer to a little girl that I mention in a footnote in the final version. It made me realize that while I’d invented good things like monsters and marvels and mayhem the book hadn’t really been about anything. I opened the drawer. “Okay!” I said to myself. “This book is going to be about love.” And so it is, and so are ones that followed.

Will there be more? I doubt it, and it’s not because of bad sales and worse publishers. It’s simply that I’d taken it as far as I could. Oh, I could come up with more ingenious plots and interesting characters and so on, but the Ox/Master Li format had become just that, a format, and no matter how well I wrote I’d just be repeating myself. Many writers are content to settle down with an endless if predictable series, but I’d be miserable, and so it was like deciding to quit smoking: cold turkey or forget about it, and I chose cold turkey. Anyway, it was a lot of fun while it lasted, and I hope Ox and Li Kao can continue to give fun to readers, and I most particularly hope that on dark and stormy nights some of those readers will be able to crawl into my alternate world and pull it over them like a security blanket.

Trade: Fully cloth-bound hardcover, signed by the author and sold out at the publisher

Limited to 200 leatherbound copies house in a custom slipcase, with a trade paperback volume of the previously unpublished first draft of Bridge of Birds and sold out at the publisher

Barry Hughart's unpublished original draft for Bridge of Birds featured a similar plot, but Number Ten Ox, the village of Ku-fu, and the ginseng plot were not present in the original draft.

The story of the original draft begins at the Monastery of Shu, whose abbot abuses Li Kao until he saves the abbot's life. The abbot then gives him a beggar's bowl and robe and tells him one day he will be called and it is his duty to follow that call. Li Kao departs on a quest to become rich and stay young in China.

Li Kao begins his journey in the city of Peking where he steals five hundred gold coins in order to start his life of wealth. While fleeing, he falls off a cliff and finds the legendary skull of Cheng Hang, who charges him to find three trinkets, a crystal ball, a bronze bell, and a small flute, in order to fix a terrible event that happened in heaven which has separated two gods in love who are unable to see each other due to the laws of heaven and can only be reunited by forming the Bridge of Birds. Li Kao is given only the knowledge of what to look for and the hint that Cheng Hang will somehow provide Li Kao with a dragon that will help guide him on his quest. His quest takes him to have multiple quarrels with the savage Duke of Ch'in who will do anything in his power to stop Li Kao from succeeding from finding a secret truth hidden inside the quest for the trinkets. In the end, he completes the quest, the Bridge of Birds is formed, and all in heaven is set right again.