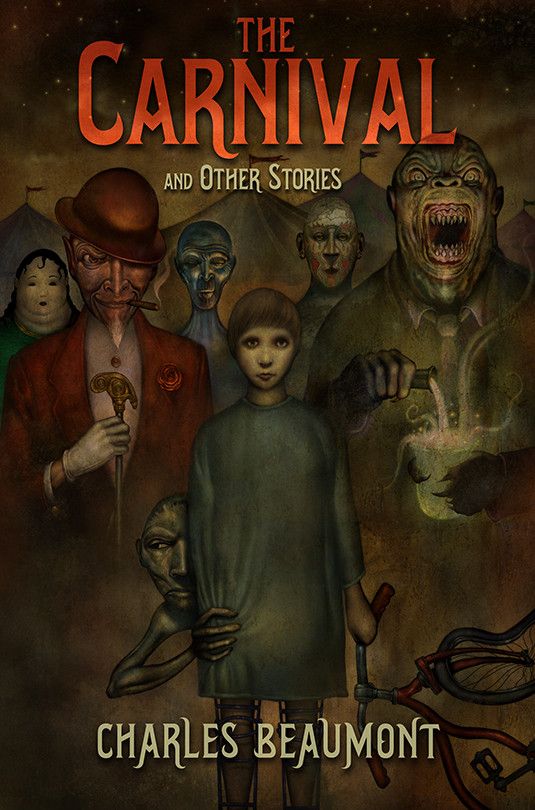 The Carnival and Other Stories

Charles Beaumont was, in the words of Ray Bradbury, “a pomegranate writer”: someone whose imagination burst with such creative seeds that it yielded a garden of rich and diverse work. The Carnival and Other Stories is a testament to the flowering of Beaumont’s unique talents. Its twenty-six stories run the full gamut of his literary legacy, from his first professional sale, “The Devil You Say”—later an episode of The Twilight Zone, the series for which he was the second most prolific writer after Rod Serling—to “Beast of the Glacier,” receiving its first publication here.

The variety of themes and approaches that Beaumont tackled is on full display in this collection, from the ruminative science fiction of “Elegy” (another Twilight Zone adaptation) to the muted horror of “Mourning Song,” and from the broad humor of “The Last Caper,” a Mickey Spillane spoof, to the elegiac poignance of “Mass for Mixed Voices,” a celebration of life distilled from a future steeped in death. Beaumont also wrote outside of the science fiction and horror genres where his work was best known and this volume collects three stories—“The Love Master,” “Genevieve, My Genevieve,” and “Dead You Know”—written for the men’s magazine Rogue, which he contributed to at the same time he was selling some of his best fiction to Playboy. His excellence as a screenwriter is celebrated further in “Anthem,” a story in script form.

Nine tales in this collection first saw publication after Beaumont’s untimely death in 1967 at the age of thirty-eight. They include the title story, a moving depiction of a father and son’s special relationship in the face of emotionally challenging circumstances; “Appointment with Eddie,” the tale of a Bartleby-like barber whose capricious refusal to give a performer a haircut dooms the man’s career; and “The Life of the Party,” a story that recalls the suggestive subtlety of Bradbury’s best macabre fiction.

Although written more than half a century ago, the stories gathered here are remarkably modern in their ideas. Beaumont grappled with themes such as the Holocaust (“The Man with the Crooked Nose”) and the racism entrenched in justice system (“The Crimes of Willie Washington”) at a time when few other writers did. The tales gathered for The Carnival and Other Stories are solid proof that Beaumont was more than a writer for his time: he was a writer for the ages.