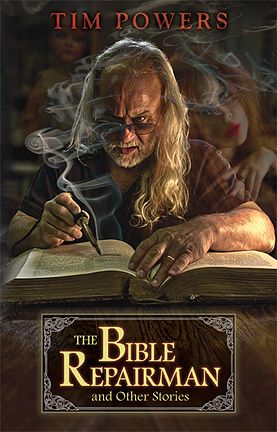 The Bible Repairman and Other Stories

The Bible Repairman is Tim Powers’s first new collection since Strange Itineraries appeared in 2005, and it is well worth the wait. In five stories and an ambitious historical novella, it offers one example after another of the author’s wit, ingenuity, and sheer imaginative reach.

The title story takes us into the life of a man with a most unusual profession, one that claims a little bit of his soul with every transaction. “Parallel Lives” and “A Soul in a Bottle” are thematically linked ghost stories in which the dead attempt, with varying degrees of success, to exert their influence upon the living. In “The Hour of Babel,” an assortment of damaged people experience, once again, the inexplicable encounter that altered their lives more than thirty years before, while in” A Journey of Only Two Paces” a simple legal procedure is transformed into a nightmarish Kabbalistic ritual.

But the real centerpiece of this resonant collection is the novella “A Time to Cast Away Stones,” previously available only in a very limited—and very expensive—edition. Set in the semi-fictional universe first described in The Stress of Her Regard, this beautifully realized narrative centers upon Edward John Trelawny, a contemporary and compatriot of the poets Byron and Shelley, and the momentous decision that faces him. In classic Powers fashion, the story shows us an actual, if little known, historical event reclaimed and transformed by a powerful imagination. The result is a distinctive contribution to modern fantasy and a significant milestone in a unique, constantly evolving career.

Limited to 500 signed and numbered hardcover copies bound in cloth

Lettered: limited to 26 lettered and signed copies, bound in leather, housed in a custom traycase and sold out pre-publication