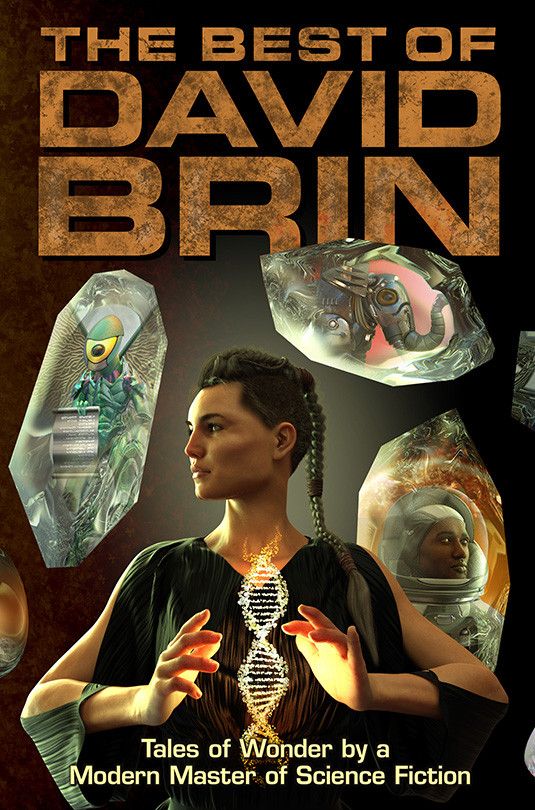 The Best of David Brin

One doesn’t have to know the world perfectly, in order to know it better. That lesson—first taught by Galileo—dwells at the core of both science and science fiction, according to legendary author David Brin. Dangers and great challenges confront the characters of his stories and award-winning novels such as The Uplift War and The Postman. But even when the odds are steep and disaster looms, there remain possibilities …

… such as when a hero climbs an impossible mountain to confront Fate itself, in “The Loom of Thessaly,” or when world powers battle over a Vegas magician’s knack for prediction, in “The Tell,” or uncovering ancient terrors long-buried under an urban landfill (“Detritus Affected”), or when a mother in labor fights to save her child from an invention gone-wrong (“Dr. Pak’s Preschool”). Brin has thrilled readers in almost thirty languages by presenting vastly imaginative—and well-grounded—challenges set in times that might yet come… along with a sometimes razor-thin hope we’ll persevere.

In this major retrospective collection of shorter work, gathered from across an extraordinary career spanning decades, you’ll find wonder via David Brin’s unparalleled talent at imagination, extrapolation, hard headed optimism, and plain old fun. Here, you will find “The Crystal Spheres,” the Hugo Award winning short story that first brought Brin wide acclaim, posing one more—colorfully strange—answer to: “Are we alone in the universe?” Before The Postman won awards as a novel and became a major motion picture, that tale of a storyteller reviving dreams of a better world originated in the Hugo-nominated novella that’s included here. Confronting one of the oldest challenges in modern SF—“What if the Nazis won?”—Brin presents an unexpected answer in “Thor Meets Captain America.” And his penchant for offering I-hadn’t-thought-of-that! answers, as well as questions, erupts in “Stones of Significance,” a post-Singularity world where human identity can and will survive technological evolution.

Writing of that last story, Brin says that “Ideas are like fruit, watered with patience and observation—but pollinated by surprise!” Here, in more than twenty stories representing the best work of a masterful writer, readers will find an entire orchard of ideas, rooted in guarded optimism and stretching skyward towards a multitude of possible worlds.

Persevere! (Tales of the Coss)

Things may just get weird.

And good news may get…complicated…