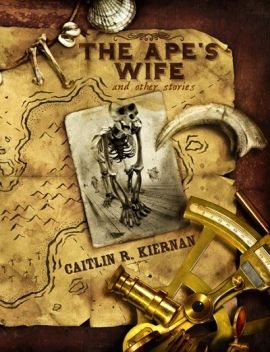 The Ape's Wife and Other Stories

Caitlín R. Kiernan has been described as one of “the most original and audacious weird writers of her generation” (Jeff and Ann VanderMeer, The Weird), “one of our essential writers of dark fiction” (New York Times), and S. T. Joshi has proclaimed, “hers is now the voice of weird fiction.” In The Ape's Wife and Other Stories—Kiernan’s twelfth collection of short fiction since 2001—she displays the impressive range that characterizes her work. With her usual disregard for genre boundaries, she masterfully navigates the territories that have traditionally been labeled dark fantasy, sword and sorcery, science fiction, steampunk, and neo-noir. From the subtle horror of “One Tree Hill (The World as Cataclysm)” and “Tall Bodies” to a demon-haunted, alternate reality Manhattan, from Mars to a near-future Philadelphia, and from ghoulish urban legends of New England to a feminist-queer retelling of Beowulf, these thirteen stories keep reader always on their toes, ever uncertain of the next twist or turn.

Black Helicopters is Caitlín R. Kiernan’s first SF novella since 2004’s The Dry Salvages. Certainly one of her most ambitious tales to date, a narrative spanning one hundred and eight-six years exposes a labyrinthine underworld of global conspiracy, secret societies, synchronicity, chaos theory, and interdimensional apocalypse. As a horrific plague unfolds on the shores of New England, two shadowy agencies are pitted against one another in a race to understand the consequences of a psychiatrist’s bizarre experiment involving a pair of albino twins. In this “game of chess,” even the most minute act sends infinite ripples through eternity, the struggle shaping the history of the future.