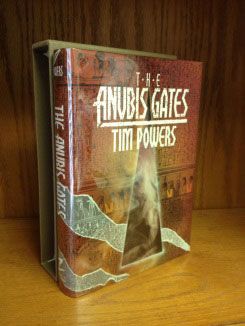 A hardcover of The Anubis Gates was published in two states the United States in September 1989. Issued by Mark V. Ziesing. Notably this edition contains some text that was not in the original Ace edition. Of this Powers says …

"When Ace Books bought The Anubis Gates, they asked for cuts — in fact, about an eighth of the book was excised. The Chatto and Windus editor knew this, and said, 'This scene in Horrabin's underground dining hall — the scene that starts with Horrabin looking up from the corpse of one of the rebellious beggar lords who has fallen from his high perch — clearly this has been cut, clearly [this] is missing the beginning of the scene. Please restore the cut text here.' Well, in fact that wasn't one of the places that had been cut — I had written the scene in that _in media res_ way from the start — but I didn't want to cross the editor, so I wrote a beginning for the scene and sent it to her. It's only a paragraph or two. When Ziesing was doing the limited edition, he said, 'Powers, if you want to restore cut bits, do it.' But I re-read the original manuscript and decided that all the cuts had been beneficial, so I left the cut scenes out — but I did give him the paragraph or two that I'd written for Roz Kaveney, the C&W editor. It's only two paragraphs at the most."

With an introduction by Ramsey Campbell, cover art by J.K. Potter and internal illustrations by Mark Bilokur, a numbered state limited to five hundred copies was also issued, this edition was signed by Powers, Potter and Bilokur.

Limited: 500 signed, numbered and slipcased copies. Note the slipcases of our copies show some shelfwear but the books are as new