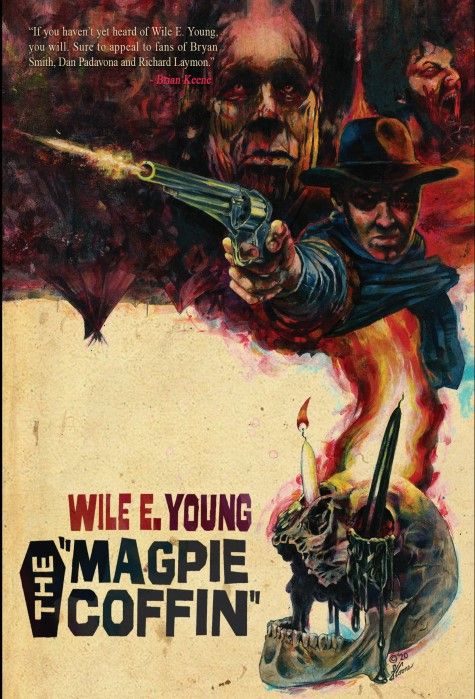 The year is 1875 and outlaw Salem Covington has spent the last twenty years collecting stories, possessions, and lives. Nicknamed “The Black Magpie” for his exploits during the war, Salem has carved a bloody trail across the western territories. Informed that his mentor, Comanche shaman Dead Bear, has been murdered. Salem vows vengeance on the perpetrators. Enlisting the help of an army scout and preserving the body of his mentor in a specially made coffin, he sets out in pursuit. But the choices of Salem’s past that earned him the moniker “Black Magpie” are riding hard behind him and the only weapon that can kill him might not be as far away as he thinks.The Magpie Coffin is an unrelenting tale of revenge, with precise brutality and extreme violence.

HUNGER ON THE CHISHOLM TRAIL
by M Ennenbach

The first cattle drive of the season leaves Texas for Abilene, Kansas along the Chisholm Trail, but unforeseen terrors lay hidden in the natural beauty of the land. In the heart of Indian Territory lies the sleepy town of Duncan, a friendly respite from the dusty land. But something lurks in the untamed West-a powerful creature that hunts to satiate its horrifying hunger. The land will run red with blood, and only Karl Beck has a chance against this ancient evil.

1879: An unknown and timeless evil descends on East Texas. James Dee, bestowed with knowledge from beyond, moves through time and space, pursuing age-old horrors and ending their reign. As he seeks the hidden town of Dust to continue his lifework, another is hot on his heels, and will stop at nothing to rip the divine knowledge from Dee.As these opposing forces collide, Dee becomes both hero and villian in his quest against the Elders.He doesn’t have time to be sorry–THERE ARE GODS TO KILL

Some things, according to Cody McCall, are worth risking a whipping. Such as, sneaking out with your friends after dark for a peek at the traveling show setting up just outside of town. Oddities, the signs promise. Marvels. Grotesqueries. Exotic attractions and mysterious magics.Not as if they’d be allowed to attend otherwise, not with parents and preacher and schoolmarm all disapproving. But how often does a chance like this come along? There isn’t much else by way of excitement in quiet, peaceful Silver River, a once-prosperous boom town slowly gone bust. Worth risking a whipping, sure. Worth risking life and limb, and maybe more? Worth risking being ripped to pieces by ravenous, inhuman brutes? Worth crossing paths with those strange, silent cult-folk from the high valley? Worth all the fire and bloodshed and horror and death?Because something far worse than any ordinary traveling show has come to town, and one thing is for certain: those who survive, if any, will never forget the night Silver River run red.

To most, 1865 was an eye-opening year. The American Civil War was officially over and the soldiers fortunate enough to survive the bloody conflict returned home to collect the pieces of their former lives. To young Arizonan, Robert Jack, the fateful desert homecoming marked the end to all he once knew. Forgiveness is overrated. Death is final. Revenge, however, dances between the fine lines of mortality and eternity.Love always finds a way.

A ruthless band of outlaws makes good their escape from execution. A mountain man seeks justice following the grisly murders of his wife and daughter. A sharp-tongued teenager flees her newly widowed mother in search of adventure. Amongst the eerie peaks and crevices of the Wichita Mountains, this assembly of pariahs converge. But it isn't just each other they need be concerned about, because there's more than frigid winds in the skies over Indian Country.

There is a house overlooking the vast, rolling plains. A home station where a traveler will be welcomed with a piping hot meal and a downy bed.It is a refuge for the weary. A beacon for the lost.A place where blood and bones feed the land.For four stagecoach passengers......a doctor in search of a missing father and daughter......a newlywed couple on the way to their homestead......and a lady in red with a bag filled with secrets...Their night at the Station has only just begun.

"THE THIRTEENTH KOYOTE"
by Krisotpher Triana

An evil has returned to the town of Hope’s Hill. When a grave robber unearths the corpse of Jasper Thurston, a piece of the body is stolen, one that will call the Koyotes from across the plains. They are a vicious company of outlaws, part madmen and part wolves. Their leader is Glenn the Dreadful, and he’s out to gather the power of the Menhir, a particle from an ancient evil. The fate of Hope’s Hill—and perhaps the world—rests in the hands of unlikely heroes. A rugged U.S. Marshall, a teenage girl out for revenge, an emancipated slave, a nun with a dark secret, and a mysterious half-breed with the number thirteen tattooed on his neck.

The Thirteenth Koyote is a werewolf western from Splatterpunk-Award-winner Kristopher Triana, author of Gone to See the River Man and Full Brutal. Filled with gunfights as well as ghouls, it is a horror epic as big as the open range.

"SHADOW OF THE VULTURE"
by Regina Garza Mitchell

As Americans move west towards their manifest destiny, they disrupt lives, steal, and murder. What happens when that brutality clashes with witchcraft and the supernatural in the small town of Soledad?

A powerful witch goes to the extreme to protect the land. A young woman weaves protective spells into clothing, but what she wants to do more than anything, is soar with the vultures. An ex-soldier accompanied by her dead friend looks for another battle to fight and will do anything to make the American invaders pay in the bloodiest ways possible. When they come together, Texas will never be the same. Power clashes between witches, warriors, brutes and innocents, and over it all hovers the shadow of the vulture.

"THE BUILT A GALLOWS FOR YOU AND ME"

"Was the threat of death all we needed to die?"

When smiles act like monsters in the dark who are pretending to be friendly, it's hard to know where to put your trust.

As a mysterious sickness starts killing the children in the town of Salinas, the townsfolk find themselves distraught and searching for answers.

A new family in town seemed to bring forth the illness. Did they bring it with them? Are they causing it to happen? Or did the family stumble into something dark and sinister, something with witchcraft on its lips?