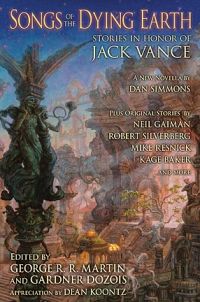 Songs of the Dying Earth: Stories in Honor of Jack Vance

Jack Vance has been a seminal figure in the development of modern fantasy, so much so that it’s nearly impossible to imagine the genre as we know it today existing without him. In the course of his more than fifty-year career, he has published dozens of major novels, as well as collections filled with marvelously crafted stories, winning the Hugo Award, the Nebula Award, the Edgar Award, the Grand Master Award from the Science Fiction Writers of America, and several World Fantasy Awards, including the prestigious Lifetime Achievement Award. Vance’s masterpiece, The Dying Earth, may be the most influential fantasy novel of the Twentieth Century, surpassed only by J.R.R. Tolkien’s Lord of the Rings trilogy, it has not only inspired several generations of fantasy novelists, but its influence has reached deep into the realms of graphic novels, comics, fantasy role-playing games such as Dungeons & Dragons, and even computer gaming.

Today, in order to honor the magnificent career of Jack Vance, one unparalleled in achievement and impact, GEORGE R.R. MARTIN and GARDNER DOZOIS, with the full cooperation of Jack Vance, his family, and his agents, suggest a Jack Vance tribute anthology called Songs of the Dying Earth, to encourage the best of today’s fantasy writers to return to the unique and evocative milieu of The Dying Earth, from which they and so many others have drawn so much inspiration, to create their own brand-new adventures in the world of Jack Vance’s greatest novel.

Half a century ago, Jack Vance created the world of the Dying Earth, and fantasy has never been the same. Now, for the first time ever, Jack has agreed to open this bizarre and darkly beautiful world to other fantasists, to play in as their very own. To say that other fantasy writers are excited by this prospect is a gross understatement; one has told Subterranean Press that he’d crawl through broken glass for the chance to write for the anthology, another that he’d gladly give up his right arm for the privilege — that’s the kind of regard in which Jack Vance and The Dying Earth are held by generations of his peers.

The trade edition will be printed on 60# Natural paper.

Each of the stories in the Subterranean Press edition of Songs of the Dying Earth will feature an original pen-and-ink illustration by Tom Kidd, who has also provided the glorious cover art.

In addition, the SubPress edition will precede the U.S. trade hardcover by six months.

Limited: 500 signed numbered copies, housed in a custom slipcase and sold out at the publisher