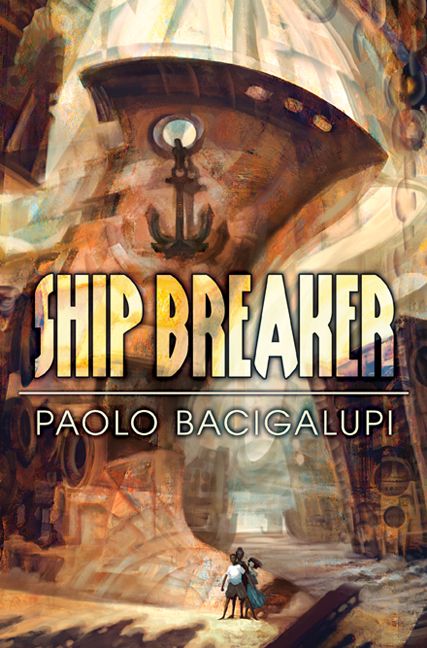 Subterranean Press is proud to announce the signed limited edition of Paolo Bacigalupi’s acclaimed second novel, Ship Breaker, which will be printed in two colors throughout, on 80# Finch, with a full-color dust jacket and a pair of full-color interior illustrations by Jon Foster.

On a devastated Gulf Coast, seventeen-year-old Nailer ekes out a bleak existence scavenging copper wire from downed oil tankers. His horizons extend no further than the dangerous community of Bright Sands Beach, where his abusive father is the most brutal threat of all. But when a clipper ship washes ashore with a live—and rich—girl on board, Nailer has a decision to make. Will he profit from his find or gamble on helping her survive? With Ship Breaker, Paolo Bacigalupi offers a disturbing yet ultimately hopeful look into the near future.

Bacigalupi’s acclaimed collection, Pump Six and Other Stories, and his multiple-award-winning debut novel, The Windup Girl, established him as one of science fiction’s boldest new writers. Praised by critics and readers alike, now Ship Breaker has made him one of the young adult field’s brightest stars. The novel was a finalist for the Andre Norton Award and the National Book Award in the Young People’s Literature category, and claimed the Michael L. Printz Award, the American Library Association’s top honor for young adult literature. This special limited edition includes an extensive new interview with the author.

Limited to 300 signed and numbered copies, fully bound in cloth