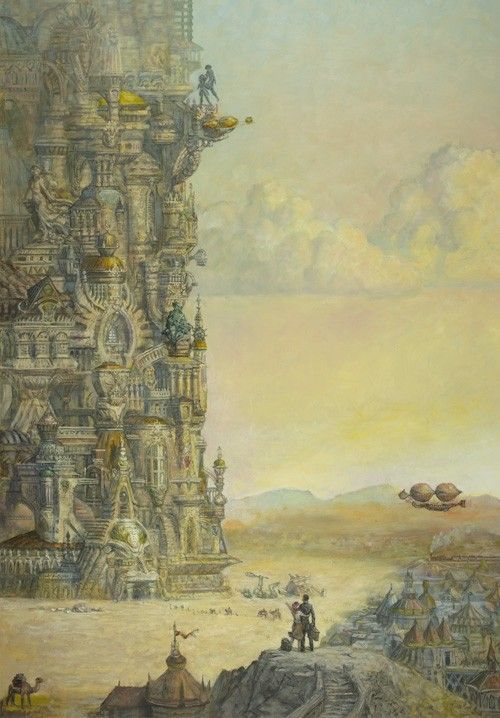 The Books of Babel: Senlin Ascends, Arm of the Sphinx and The Hod King

Subterranean Press is pleased to announce that they will be publishing signed limited editions of Josiah Bancroft’s beloved series, The Books of Babel, with the first two installments (Senlin Ascends and Arm of the Sphinx) due to be published simultaneously as separate books, but sold only in pairs.

Their editions will be:

Each set will contain a matched numbered copy of both Senlin Ascends and Arm of the Sphinx.

Senlin Ascends (The Books of Babel, volume one):

While honeymooning in the Tower of Babel, Thomas Senlin loses his wife, Marya.

The Tower of Babel is the greatest marvel of the Silk Age. Immense as a mountain, the ancient Tower holds unnumbered ringdoms, warring and peaceful, stacked one on the other like the layers of a cake. It is a world of geniuses and tyrants, of airships and steam engines, of unusual animals and mysterious machines.

Thomas Senlin, the mild-mannered headmaster of a small village school, is drawn to the Tower by scientific curiosity and the grandiose promises of a guidebook. The luxurious Baths of the Tower seem an ideal destination for a honeymoon, but soon after arriving, Senlin loses Marya in the crowd. Senlin’s search for Marya carries him through madhouses, ballrooms, and burlesque theaters. He must survive betrayal, assassination, and the long guns of a flying fortress.

But if he hopes to ever find his wife, Thomas Senlin must do more than survive. This quiet man of letters must become a man of action.

Arm of the Sphinx (The Books of Babel, volume two):

Forced by necessity into a life of piracy, Senlin and his crew struggle to survive aboard their stolen airship. Senlin’s search for his lost wife continues, even as her ghost hounds his every step. But the Tower of Babel proves to be as difficult to reenter as it was to escape.

While searching for an unguarded port, Senlin encounters the camp of Luc Marat, who seems equal parts bandit and humanitarian. One thing is for certain: his asylum for the downtrodden hods is not as peaceful as it appears.

In desperation, Senlin turns to the mysterious and dangerous Sphinx, with whom Edith shares a terrible bond. They discover the Sphinx’s help does not come cheaply.

Senlin is soon faced with an impossible choice between his friends, his freedom, and his wife.

The Hod King (The Books of Babel, volume three):

Fearing an uprising, the Sphinx sends Senlin to investigate a plot that has taken hold in the ringdom of Pelphia. Alone in the city, Senlin infiltrates a bloody arena where hods battle for the public's entertainment. But his investigation is quickly derailed by a gruesome crime and an unexpected reunion.

Posing as a noble lady and her handmaid, Voleta and Iren attempt to reach Marya, who is isolated by her fame. While navigating the court, Voleta attracts the unwanted attention of a powerful prince whose pursuit of her threatens their plan.

Edith, now captain of the Sphinx's fierce flagship, joins forces with a fellow wakeman to investigate the disappearance of a beloved friend. She must decide who to trust as her desperate search brings her nearer to the Black Trail.

As Senlin and his crew become further mired in the conspiracies of the Tower, everything falls to one question: Who is The Hod King?