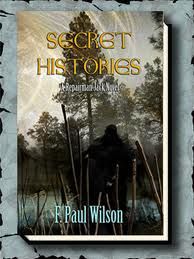 Exciting news for fans of Repairman Jack. F. Paul Wilson has contracted to write a trilogy of young adult novels based on Jack. The first, Secret Histories, starts with Jack at fourteen years old. Gauntlet will be publishing a signed limited edition of all three, the first seeing release around February (well before the trade edition is released). Here's what the author says about the first book in the trilogy:

Place: Johnson, NJ, a small town on the edge of the fabled and mysterious Pine Barrens. Among its odd inhabitants: an old woman with a three-legged dog; some call her a witch. There's the town drunk, Weird Walt Erskine, who always wears gloves, no matter what the temperature. There's USED, the store that sells all sorts of things from the past. And that's just a sampling.

The Boy: a fourteen-year old named Jack. Nobody knows Jack. Not his parents, not his few friends, not even Jack himself

But he's learning. He's discovering that he has a knack for fixing things. Not bikes or toys or appliances -- situations.

Here is where it all starts -- with a withered corpse discovered deep in the Pine Barrens…the victim of ritual murder.

And unearthed with it is an ancient artifact carved with strange designs. Where and when is it from? What is the secret of the corpse? What other mysteries hide in the dark, timeless Pine Barrens? And who doesn't want them revealed?

The world, Jack's town, the surrounding Barrens, even Jack himself -- they all have…

Read for the first time Jack's formative years. You'll meet his mother and father, big sister Kate and his bully of a brother Tom. While aimed for young adults, F. Paul Wilson doesn't write down and the book is as enjoyable for adults as it is for teens. And, as you can see from the above description there's plenty of foreshadowing of events that were to overtake Jack as an adult (i.e. An old woman with a dog … making herself known to Jack when he's just fourteen!)