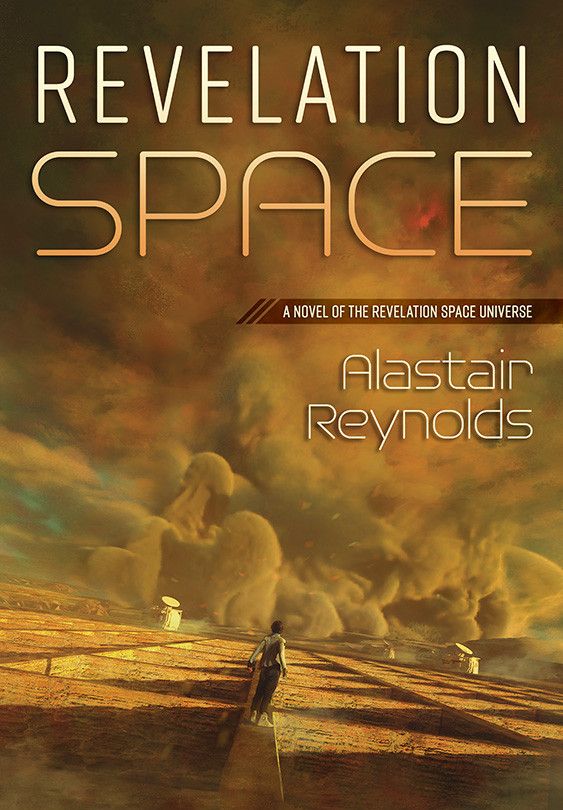 Revelation Space will be oversized, printed in two colors throughout, on 80# Finch.

As Revelation Space opens, a razorstorm threatens the dig where Archeologist Dan Sylveste is seeking the truth behind the mystery of an alien artifact nearly a million years old.

Meanwhile, across space, Ilya Volyova and the other members of the ruling triumvirate of the starship Nostalgia for Infinity are willing to do anything to save the life of their captain, who is infected with a nanotech virus, known as Melding Plague, a relentless remaker that combines human cells with nanotech implants.

And then there’s Ana Khouri, the deadly assassin who brings them all together.

The shadow-haunted corridors of the starship recall gothic castles even as the Nostalgia for Infinity approaches the speed of light, a journey described in terms well beyond cutting edge science. What the disparate characters find at their eventual destination may launch the endgame for the human race.

These are the intricate strands that make up Alastair Reynolds’ Revelation Space, a landmark of modern Space Opera. The author’s debut, now a beloved modern classic, spans windswept planets, far flung solar systems, the black void of interstellar space, and explores the fabric of reality itself. It also established Reynolds as one of the premiere science fiction writers of our time.

Reynolds holds a PhD in Astronomy and is a veteran of the European Space Agency. He brings this experience to a book that simultaneously probes the future of humanity and the depths of the human heart. Revelation Space more than earns its title. Revisit it now in this new edition.