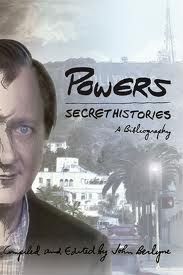 Don't forget to check out the art from this book that we have available, follow this link!

A book that essentially redefines the term 'bibliography', Secret Histories has been nearly ten years in the making and brings together an astonishing range of Powers ephemera - a huge treat and a remarkable resource for both fans and collectors alike.

As well as a complete, illustrated reference of every Tim Powers book published to date, Secret Histories offers an extraordinary insight into the stories behind the stories, collecting together in a single volume Powers material previously seen only in private collections.

Here - in print for the very first time - you'll find poetry, drawings, research and plotting notes, novel outlines, early drafts, out-takes and an excerpt from the author's unpublished 1974 novel, To Serve in Hell.

Slipcased Set: This 2-volume slipcased hardcover set includes an additional volume: an incomplete and previously unpublished novel written by Powers in the early seventies entitled The Waters Deep, Deep, Deep. Only available as part of this package, The Waters, Deep, Deep, Deep will be signed by Powers and will feature unique cover art and internal illustrations by him, as well as both an introduction and afterword and is limited to 200 copies signed by all

Note regarding sale books, so have a lot of these books, they may have some minor defects, nothing major just shelf wear.

Lettered - Life - The edition was limited to 26 lettered copies and an undetermined number of "Life" lettered copies of which it is our understanding there may have been 26 of?  This copy is one of the lifetime subscription copies, is identical to the lettered set sold to the general public, except that the limitation line of each book is marked "Life D"  There are some specs of glue on the exterrior of the slipcase from production, otherwise, this set is fine, which is unusual in that this set weighs 10 pounds and we've seen more with distroyed slipcases than not!  As you might expect, shipping is going to be extra on this.