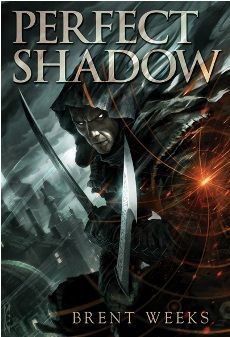 Subterranean Press is proud to present a prequel novella to Brent Weeks’ best-selling fantasy series, The Night Angel Trilogy. They've only been able to secure the rights to produce 1000 signed limited copies of this tale—the only print edition under contract. Given the fact that the individual volumes in the trilogy have sold hundreds of thousands of copies, Perfect Shadow is likely to be in very high demand.

***
The Foul, Unnatural Murder of Gaelan Starfire & the Birth of Durzo Blint "I got a bit of prophecy,” the old assassin said. “Not enough to be useful, you know. Just glimpses. My wife dead, things like that to keep me up late at night. I had this vision that I was going to be killed by forty men, all at once. But now that you're here, I see they’re just you. Durzo Blint."

Durzo Blint? Gaelan had never even heard the name.

***
Gaelan Starfire is a farmer now, happy to be a husband and a father; a careful, quiet, simple man. He’s also an immortal, peerless in the arts of war. Over the centuries, he’s worn many faces to hide his gift, but he is a man ill-fit for obscurity, and all too often he’s become a hero, his very names passing into legend: Acaelus Thorne, Yric the Black, Hrothan Steelbender, Tal Drakkan, Rebus Nimble.

But when Gaelan must take a job hunting down the world's finest assassins for the beautiful courtesan-and-crimelord Gwinvere Kirena, what he finds may destroy everything he's ever believed in.

Limited to 1000 signed numbered copies, bound in leather and sold out at the publisher

Lettered limited to 26 signed, lettered and traycased copies we offer for sale a "PC" copy which is identical in every way to a lettered copy but has the letters "PC" in the limitation line, the "PC" denotes "Publisher's Copy" and is one of a very few copies produced for use by the Publisher, usually for contributors.