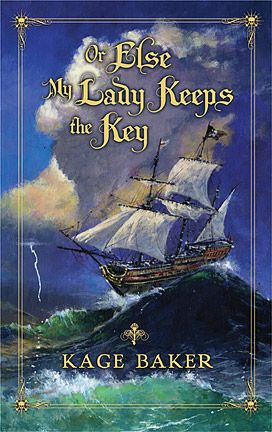 Or Else My Lady Keeps the Key

Subterranean Press is proud to present an exclusive pirate novel by the author of the acclaimed "Company" series.

His name is John James--at least, that's the name he gives to anyone asking. He's a former pirate just back in Port Royal from the sack of Panama, and he has every intention of settling down and leading a respectable life. First, though, he must honor a promise and deliver a letter to the mistress of one of his dead comrades.

But the lady is much more than she seems, and the letter turns out to contain detailed instructions for recovering a hidden fortune. It's one thing to know where treasure may be found; finding it, and keeping it, is quite another. On his quest for a prince's ransom John is joined by two unlikely allies: a black freedman named Sejanus Walker and a humble clerk named Winthrop Tudeley. Pirate attacks, hurricanes, shipwrecks, sharks, unearthly visitations and double-crosses follow. Especially double-crosses...

Limited to 15 lettered signed leatherbound copies, housed in a custom traycase and sold out at the publisher

PC Lettered: 26 copies, bound in leather, signed by author, housed in a custom traycase (This is one of an unknown number of copies marked "PC" of the lettered state of this book, it is identical to the actual lettered state except it has "PC" in place of the letter designating "publisher's copy" and used by the publisher as extra copies for the author or for personal use.)