The first in Subterranean Press' plans to bring to light some unduly neglected works by noted poet William Ashbless, this new chapbook contains "Slouching Toward Mauritius," a piratical short story written more than 25 years ago but never published, along with a lengthy pirate poem, "Moon-Eye Agonistes." Ashbless' notorious compatriots Tim Powers and James P. Blaylock have contributed an introduction and afterword, respectively, to put the pieces in their proper historical perspective.

Printed in two colors throughout, this deluxe chapbook is fully illustrated with four two-color illustrations by Gahan Wilson!

Softcover Chapbook: 1000 signed softcovers and SOLD OUT at the publishers PLUS our copies are also signed by Gahan Wilson

"PC" copy of the lettered: handbound and housed in a handmade traycase, PLUS our copies are also signed and remarqued by Gahan Wilson

Lettered: handbound and housed in a handmade traycase, this book was limited to 26 copies each contaning a separate portolio with an orignial manuscript page (one of a kind) of a poem written specifically for this book. Along with the original are copies of those poems written for the other 25 lettered books PLUS our copies are also signed and remarqued by Gahan Wilson 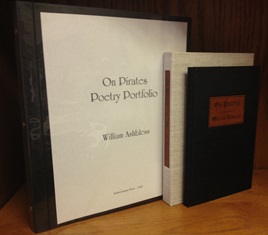