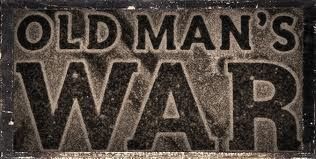 You're sixty-five years old, your wife is dead, and your life is winding down. What do you do next? If you're John Perry, the answer is simple: You join the military. The Colonial Defense Forces take Earth's senior citizens and retrofit them young, strong bodies -- and then throws them into the unending war humanity is waging against other civilizations up there among the stars. John Perry is in the middle of it all and learning fast to survive, because the alternatives -- for him and humanity -- are grim. And it's in the middle of this struggle for survival that Perry meets a woman who seems achingly familiar...

A traitor to humanity is helping a trio of alien races destroy humanity -- all of it. His motivations are unclear, his whereabouts unknown. But the traitor left something behind: a recording of his consciousness. That consciousness is poured into Jared Dirac, a warrior born as an adult to fight the battles no one else will take. As Jared fights, he learns more about the man whose personality has been placed in his head -- and learns why he turned traitor. But can Jared, bred to save humanity, be trusted not betray it instead?

The second installment in John Scalzi's "Old Man" universe will be published as a companion volume to Old Man's War. Once again, Vincent Chong will be contributing a full color cover and several full color interior illustrations.

John Perry and Jane Sagan--soldiers in Old Man's War and The Ghost Brigades--have laid down their weapons and as husband and wife has started a new life on a sleepy colony world. But when the Colonial Union shows up at their door and asks the two to lead a new colony, the two find themselves in the stars once more, leading a fractious collection of settlers to a world called Roanoke.

But Roanoke is not what it seems - not what Perry and Sagan were told it was - and soon the pair are fighting for survival: Not only their own, but that of their colony, and that of humanity in an increasingly hostile universe. And as they fight for their lives, they confront another question entirely: Where does their allegiance lie? With the colony of Roanoke? With the Colonial Union? With their family? Or somewhere else entirely? A question with no easy answer--and no margin for error.

Hugo-nominated for Best Novel in 2008, this special limited edition of The Last Colony comes with stunning cover and interior artwork by Vincent Chong.

Lettered: 15 signed leatherbound copies, housed in a custom traycase and sold out at the publisher

Meet Zoe Boutin-Perry. Daughter. Colonist. Icon. The only hope for the people she loves.

Zoe thought when her parents were selected to lead a new colony world, that the three of them would begin a new life among that stars—but the colony isn't what it seems. Zoe, her family and her fellow colonists are unwilling thrust front and center in a struggle between the human Colonial Union and the alien Conclave, and there's no guarantee that any of them, human or alien, will survive.

Zoe is more than just a teenager caught in the middle. Her unique past makes her the one person who can save her colony, and in saving it, save humanity. But it won't be easy, or simple, or sure. Zoe will need every bit of her intelligence, wit and will to help her family and friends, and make it back to them alive.

The fourth book in the Old Man's War series, and a companion book to The Last Colony, Zoe's Tale was nominated for the Hugo and Norton Awards.

Lettered: Limited to 15 lettered, signed and leatherbound copies, housed in a custom traycase

The Colonial Union stands on the precipice of chaos. Newly estranged from the Earth, the source of its soldiers and colonists, humanity’s union of planets is increasingly vulnerable to the alien species that it has warred with for centuries... and increasingly suspicious of The Conclave, a new confederation of alien worlds that many in the Colonial Union believe signals the end of human freedom in the galaxy.

Pressed to change in these times of decreasing resources and dwindling option, the Colonial Union tries a new strategy: Diplomacy. It is reaching out to species that in other times they might have fought. But even as the Colonial Union moves toward peace, it becomes increasingly clear that some would prefer other, more dangerous paths... paths that could lead to the extinction of the human race. Diplomats, soldiers, colonists and aliens alike are caught up in a grand game, where not all the players are seen, nor all their motivations obvious.

John Scalzi returns to the best-selling, Hugo-nominated “Old Man’s War” universe, with thirteen tales which taken together create a novel of intrigue and action, and push human and alien alike to the breaking point.

As many of you know, The Human Division was originally published as thirteen separate ebook installments, each with a wraparound John Harris illustration. For the first time ever in print, these gorgeous pieces are included as a full-color portfolio in this edition.

Fans of John Scalzi's "Old Man" universe, prepare yourselves: there's a long new story in that universe, told from the point of view of one of the series' most intriguing characters.

Subterranean Press is proud to announce The Sagan Diary, a long novelette that for the first time looks at the worlds of the Hugo-nominated Old Man's War and its sequel The Ghost Brigades from the point of view of Lieutenant Jane Sagan, who in a series of diary entries gives her views on some of the events included in the series... and sheds new light into some previously unexplored corners. If you thought you knew Jane Sagan before, prepare to be surprised.

Questions for a Soldier

The chapbook is short story length, but what I've written for it is not a conventional short story. If you've read Old Man's War, you'll recall how John Perry, the book's protagonist, does a "goodwill" tour of the colonies after the Battle of Coral. I thought it would be interesting to zoom in to one of the stops on that tour and catch John Perry in the act of talking with the colonists, some of whom are happy to see him, and some of whom are not. The story takes place in the back and forth between Perry and the colonists, and in the events and answers that get revealed in the questions.

If you're a fan of John Perry and the OMW universe, here's why this chapbook might be of interest to you: