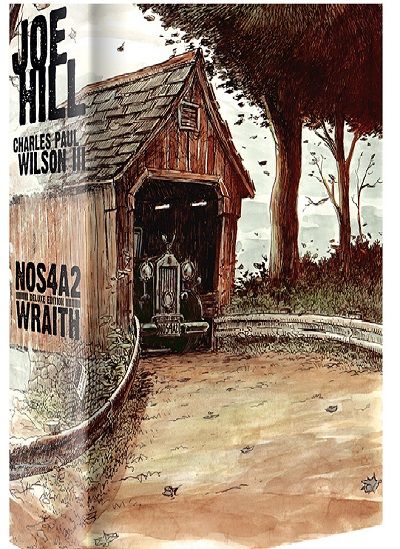 IDW Publishing is creating a signed, limited edition of Joe Hill’s classic-in-the-making novel, NOS4A2. The book is signed by Joe Hill and Charles Paul Wilson III and is hand-numbered to 999. This new collection includes the 172-page graphic novel prequel, Wraith, as an essential part. Exclusively for this collection, Wraith series artist Charles Paul Wilson III has created 26 new illustrations (13 color, 13 black and white), a new full-color wraparound dust jacket, and a detailed map of Christmasland featured in the end pages. Mr. Wilson will also be personalizing each Christmasland-themed signature plate with a small original sketch inside a gruesomely twisted advent calendar. This 852-page oversized hardcover is packaged in an ornate hand-built cloth slipcase and features a debossed cloth cover.

Charlie Manx is a very bad man with a very special car—a 1938 Rolls-Royce Wraith with the vanity plate NOS4A2. Charlie takes children for rides in his car, all the way to Christmasland. Christmasland is a magic place, a place just for children.

Victoria McQueen has a gift for finding lost things. If she rides her bike through the Shorter Way Bridge, she can find anything that’s lost. She’s also the only person ever to have escaped from Charlie Manx. Charlie may have died, but he hasn’t forgotten Victoria, and he takes her son for a ride in his car.

Victoria McQueen will do anything to save her son, but the Shorter Way Bridge has become a more perilous crossing than it was when she was a child. And who wouldn’t want to have Christmas…forever? Sleigh bells ring….

In his terrifying new novel, NOS4A2, New York Times bestselling author, Joe Hill, makes sure you’ll never listen to Christmas carols without a shiver again. But more than just horror, NOS4A2 is a story of strength, of magic, of family, and the costs of love. It’s about finding what is lost, even when what we lose is ourselves.

About the Graphic Novel:

Joe Hill’s New York Times bestselling novel, NOS4A2, introduced readers to the terrifying funhouse world of Christmasland and the mad man who rules there: Charlie Talent Manx III. Now, in an original new comic miniseries, Hill throws wide the candy cane gates to tell a standalone story that is at once both accessible to new readers and sure to delight fans of the book.

Limited to 999 signed and numbered hardcover copies, each with an original small sketch by the artist and packaged in a hand-built slipcase (shipping will be extra on this due to size and weight)

Lettered: limited to 26 copies housed in a traycase with newly illustrated map of Christmasland featured as the end pages.  Each book contains an original hand-drawn full color illustration by Wraith artist, C. P. Wilson, III housed in a seperate hardcover folder on top of the book.  The illustration with this copy is entitled "Charlie Manx" as pictured

click here for Matched Set: Subterranean Press' NOS4A2 and IDW Publishing NOS4A2/Wrath
This set is the same number, which is very unusual as the books were published by two different companies.  In addition the Subterranean Press Book comes with the custom slipcase made for Subterranean Press, AND the Bone Hammer that was given away randomly by Subterranean Press.  Originally made to be part of the lettered edition it is explained as " custom made autopsy bone mallet, Charlie Manx’s weapon of choice" 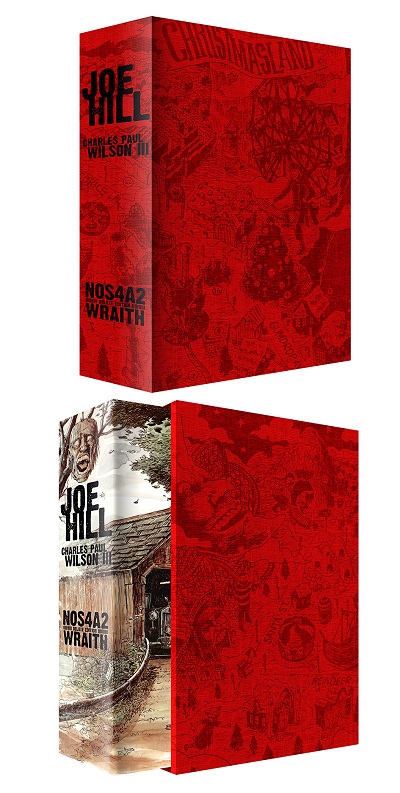