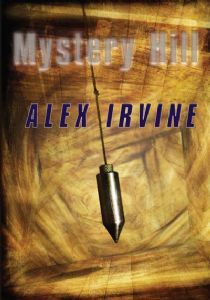 From the astonishing imagination of Alex Irvine: Mystery Hill, a gonzo SF novella in the tradition of Henry Kuttner and Paul Di Filippo...

In his three decades of running Mystery Hill, a roadside attraction where water famously flows upwards, Vietnam veteran Ken Kassarjian believes he's seen it all: conspiracy theorists who think he's a shape-shifting alien, crusading debunkers who think he's a fraud, stoned local teenagers who plague his minigolf course after hours. And as if the business of operating a tourist trap isn't weird enough, there are the strange critters running around in the woods, and the malevolent doings of the neighbors, the Boswells, Boozy by name and decidedly boozy by nature. Their latest moonshine: alien tea, anyone?

Whatever precarious equilibrium Ken might have found in his oasis of gravitational eccentricity goes out the window with the appearance of Fara Oussemitski, a physics professor with her own ideas about what makes Mystery Hill tick. When she turns up one morning with a van full of instruments, Ken starts to discover that not only is Mystery Hill stranger than he had imagined, it's stranger than he could have imagined.

Lettered It is our understanding that PS Publishing sold 26 lifetime subscriptions, as a perk of that subscription the purchaser would receive a copy of the signed state of a particular book but instead of a number in the limitation line, it would contain a letter, each subscriber was assigned a letter, in all other aspects the book is identical to the "Limited" copy.