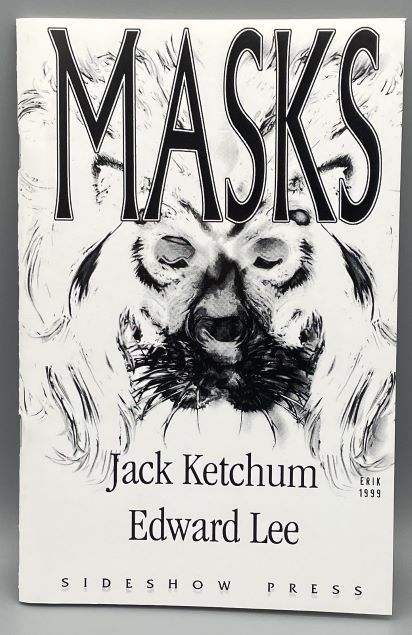 Produced for ChillerCon in October of 1999 by Sideshow Press.

Note the lettered hardcovers were bound in a fake maroon snakeskin, apparently there were also some copies bound in orange cloth, we assume for contributors as the one we offer is from Edward Lee's Collection.

David G. Barnett - You will notice that there are a number of books we are listing that will have the designation of DB, Dave Barnett, David Barnett, Necro, Necro Dave, etc. in the limitation line.  Dave was a great friend of ours, whose life was tragically ended way too short in an auto accident in 2021.  Dave was a book designer (we will be listing a number of books by other publishers which he either designed or were sent to him and they will be designated as listed above) and publisher, his imprints were known as Necro Publications, Bedlam Press and Weird Press Books, among others.  We have acquired his personal collection (and working on getting overstock from his business to his authors (if you were published by Dave and we have not gotten in touch with you please reach out to us at tony@camelotbooks.com) the book listed in this listing is from his personal collection and marked as such.