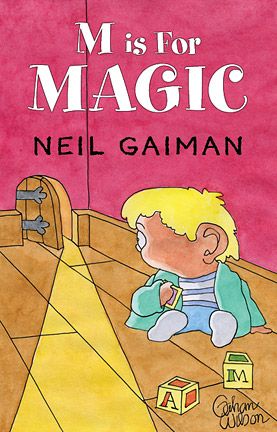 M Is For Magic

Best-selling writer Neil Gaiman's M is for Magic is his first collection for readers of all ages, in the tradition of such Ray Bradbury classics as R is for Rocket and S is for Space.

In M is for Magic, readers will be enchanted by a neighborhood cat that fights a nightly battle to save his family from evil, a hardboiled nursery rhyme story, and many other delights as only Neil Gaiman can provide.

Each story in this edition will feature a two-color illustration by none other than Gahan Wilson. Subterranean is still investigating cloth and paper choices, but hope to print the book on 80# Finch, a high quality, thicker paper than usual. Gahan Wilson will also be signing the book.

This is a unique one of a kind copy, it is not Lettered or marked PC, the book is bound as a lettered book and housed in a lettered  traycase BUT it is designated "Founder's Copy" on the limitation line. No other copy of this book is designated in this manner, this is your chance to own the rarest and most unique Lettered State of this book.