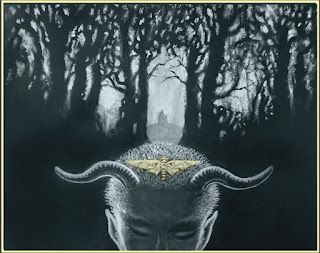 Nearly twenty five years in the making, Sarob Press is absolutely honoured and thrilled to, at long last, present KING SATYR, a novel by RON WEIGHELL. Ron first mentioned the novel in his introduction to the Ghost Story Press edition of his collection THE WHITE ROAD (1997) and, when Ron sadly passed away in December of last year, he left the novel almost* complete.

*there are a very few small sections which Ron told Fran he might have expanded slightly, but missing these, in no way, hampers the story or the otherwise smooth flow of the novel.

In Ron's Afterword to KING SATYR he shares a discovery from his research into Mayan folk magic:  ‘...there is an animal companion or familiar, associated with the Shamanistic opening of the portals of the Underworld, called the Wahy or Weyhel. One of the most powerful forms of the Weyhel is the Scribano, or writer. This kind of Weyhel is considered immortal, because even after death he can create himself anew with a piece of paper. He can reinvent himself by writing himself into existence.’

Ron’s wife Fran has, with help and input from author Mark Valentine and Robert Morgan of Sarob Press, worked tirelessly to bring this project to fruition and to present it in a beautiful edition for the author's very many admirers. Featuring characters who will be familiar to fans of THE WHITE ROAD, this Austin Osman Spare inspired Alphonsus Gaunt/Nicholas Hallam novel, charting the occult and pagan history and experiences of mystic seeker Cyrus Burton, and mostly set in the darkly satanic 1960s/1970s, is presented in a Sewn Hardcover Edition which, we hope, Ron would have very much approved of.

Titling font, and all the art by NICK MALORET, were chosen and agreed upon with Ron and Fran before he sadly passed away.