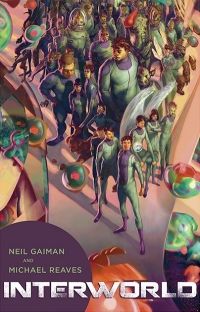 Interworld AND The Silver Dream AND Eternity's Wheel

An astounding tale of adventure, danger, magic, science, friendship, spaceships, and, oh yeah, the battle to save all the people in all the worlds in all possible dimensions.

In fact, he’s the kind of guy who gets lost in his own house.

But one day, Joey gets really lost. He walks straight out of his world and into another dimension.

Joey’s walk between worlds makes him prey to armies of magic and science, both determined to harness Joey’s power to travel between the dimensions. The only thing standing in their way is Joey-or, more precisely, an army of Joey’s, all from different dimensions and all determined to save the worlds.

Now Joey must make a choice: return to the life he knows or join the battle to the end.

Interworld will be printed in two colors throughout, designed to match its sequel, The Silver Dream. 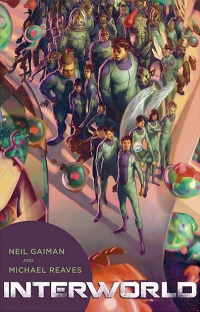 After Mastering the ability to walk between dimensions, Joey helped save the Altiverse from destruction. But the rival powers-one of magic, one of science-who seek to control all worlds are still out there, and InterWorld’s peacekeeping mission is far from finished.

When a stranger named Acacia does the impossible and follows Joey back to BaseTown, things get complicated. No one knows who she is or where she’s from-or how she knows so much about InterWorld.

Dangerous times lie ahead for Joey and the mission. There’s a traitor in the group of Freedom Fighters, and if Joey has any hope of saving Interworld, the Altiverse, and the mission, he’s going to have to rely on his wits-and, just possibly, on the mysterious Acacia Jones.

The Silver Dream is a riveting sequel to Interworld, full of bravery, loyalty, time and space travel, and the future of a young man who is more powerful than he realizes.

The Silver Dream will be printed in two colors throughout, designed to match its prequel, Interworld. 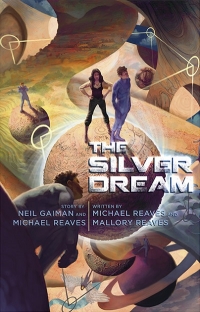 We also offer for sale a "PC" set which is identical in every way to a lettered set but has the letters "PC" in the limitation line, the "PC" denotes "Publisher's Copy" and is one of a very few copies produced for use by the Publisher, usually for contributors.  NOTE the copy of Interworld does have three indentations on the top/front of the traycase where something was stacked on it, I'd tke a  picture but I  don't think it would show up.  If there is an issue or concern, ask and I'll take a picture and send it to you.