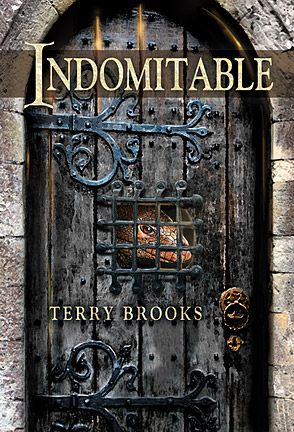 Subterranean Press is pleased to announce this special edition of Terry Brooks’ novella, Indomitable, which will feature a full color dust jacket, eight full page black and white illustrations, as well as three additional full color illustrations exclusive to the Signed Limited Edition. All of the artwork is already in hand, and the book has been fully designed and proofread.

Master fantasist Terry Brooks first conjured the unforgettable world of the magic-wracked Four Lands more than three decades ago, and its boundaries continue to expand into new territory. With Indomitable, Brooks provides an essential epilogue to the beloved Shannara trilogy that started it all.

Two years have passed since Jair Ohmsford aided his sister Brin in her quest to destroy the evil living tome known as the Ildatch. When word comes that a single page of the book, covered in lines pulsing with dark energy, survived Brin’s magic, Jair must take up the fight alone. But Jair’s gift is not the equal of his sister’s, and as he steals into the prison fortress of Dun Fee Aran—where he almost died in his first foray against the Ildatch—he has nothing to rely upon but the power of illusion. Illusion, and the memory of an ally who died to defend him.

Trade: 1500 fully cloth bound hardcover copies and sold out at the publisher

Limited to 300 signed and numbered copies, bound in leather, with three full color illustrations not in the trade and sold out at the publisher