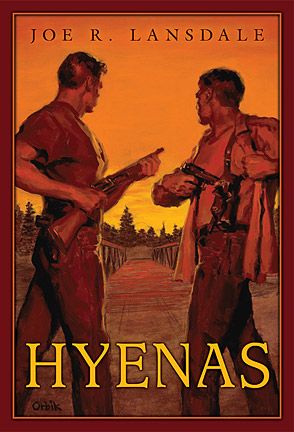 Hyenas marks the always-welcome return of Joe R. Lansdale’s most indelible fictional creations: Hap Collins and Leonard Pine. Once again, the embattled but resilient duo find themselves enmeshed in a web of danger, duplicity, and escalating mayhem. The result is a tightly compressed novella that is at once harrowing, hilarious, and utterly impossible to put down.

The story begins with a barroom brawl that is both brutal and oddly comic. The ensuing drama encompasses abduction, betrayal, robbery, and murder, ending with a lethal confrontation in an East Texas pasture. Along the way, readers are treated to moments of raucous, casually profane humor and to scenes of vivid, crisply described violence, all related in that unmistakable Lansdale voice. An essential addition to an already imposing body of work, Hyenas shows us both the author and his signature characters at their inimitable best. It doesn’t get better than this.

Limited to 400 signed and numbered copies, bound in leather, with a different cover design than the trade hardcover and sold out at the publisher