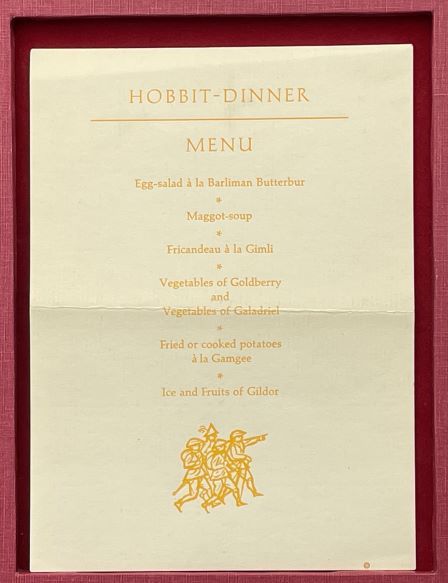 The date, March 28, 1958, the time, 5:30 pm, the place, the Flevo-restaurant (not actually a restaurant at all, rather part of a multi-functional building in Rotterdam, Holland, the Netherlands), a hall used for concert, exhibitions and even a cinema, capacity 200 guests!  The Guest of Honor – J.R.R. Tolkien.

This, the one and only event honoring Tolkien he actually attended, this being “…the first time, and also the last time, that Tolkien had accepted such an invitation.” (This quote as well as other information found here was taken from Tolkien’s Exceptional Visit to Holland: A Reconstruction, written by Rene van Rossenberg in 1996, the complete story can be read here https://dc.swosu.edu/cgi/viewcontent.cgi?article=2162&context=mythlore ).

For this event “Nicely decorated menu cards were printed by Het Spectrum. Every course had a Tolkienesque name, such as “Egg-salad a la Barliman Butterbur”, “Vegetables of Goldberry” and “Ice and Fruits of Gildor”. Some confusion amongst the guests was caused by “Maggotsoup”; people feared the contents of the soup. But to everybody’s relief it was of — course — mushroom. Also, meat was served (“Fricandeau a la Gimli”) which was a problem, for it was Friday and Tolkien was a Roman Catholic. Catholics are not allowed to eat meat on Friday. But the organizers had thought of that and had asked - and received – dispensation from the diocese of Rotterdam. Sotemann had a little card from the deacon in his pocket, proving that dispensation was given in case Tolkien asked. He did not, and interestingly enough Sotemann said to me that Tolkien did not strike him as a man who would be concerned with a thing like that.” Id at page 307.

What we offer here is not only the only example of the aforementioned menu card we can find any reference to being on the market, but making it even more unique is what is on the back, boldly signed on the back is in fact the signature of J.R.R. Tolkien.

Over the last quarter of a century, you have seen us offer many rare items, I don’t think that anyone has ever heard us refer to any of those items as “Investment Quality.”  Well, we are saying it now, if you are one of the many people looking to park some cash somewhere other than a bank or the stock market in these very troubling times, this is the place.  Think about it, while Tolkien is listed in numerous “Best of” rankings he is always listed as one of the most significant authors of the 20th century, and when you think Tolkien, what comes to mind?  I think it is safe to say, The Hobbit and The Lord of the Rings.  On top of that, Tolkien’s signature is rare, in fact some claim that Stephen King signs more items in one sitting than Tolkien signed in his entire life! So, let’s look at some of the signed, Hobbit/Lord of the Rings, Tolkien pieces offered on the web (we looked at the listings on the ABE) at the time of this writing:

So, based on what is out there, and what this represent, at $15,000, this is really not a bad deal.  I’m sure you are going to ask, if it is such a good investment why aren’t we keeping it?  Good question, the answer is we are in the business of turning books, a friend of ours and book dealer who taught us a lot told us long ago, price these types of items so that if it walks out the door we won’t be upset, this is such an item and at such a price, if it sells great, if notm, equally great, but bottom line is we are in the business of at the very least, making the offer to sell.

Condition: the card is creased, one spot on bottom of front of menu and another very small spot on back, as pictured, otherwise clean and crisp, housed in custom traycase.