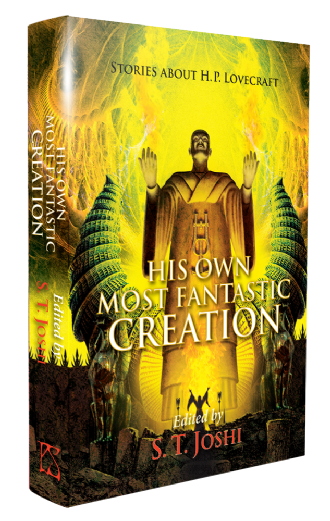 His Own Most Fantastic Creation

H. P. Lovecraft (1890–1937), the pioneering writer of weird fiction, has himself become an icon in popular culture. Stories, novels, and other works featuring the gaunt, lantern-jawed gentleman from Providence, Rhode Island, have proliferated. These works have been triggered by the incredible amount of knowledge we have on the writer—his family, his friends, his idiosyncrasies and eccentricities—as found in his thousands of surviving letters.

This anthology takes the figure of Lovecraft and enmeshes him in a series of bizarre and supernatural adventures. Darrell Schweitzer focuses on Lovecraft’s childhood, when he was plagued with dreams of “night-gaunts” and was left bereft by the early death of his father.

Mark Samuels focuses on Lovecraft’s creation of imaginary tomes of forbidden lore, while the stories by Richard Gavin, David Hambling, Jason V Brock, and S. T. Joshi supply broader ruminations on the origins of Lovecraft’s revolutionary motifs. While eschewing Lovecraft himself as a character, the tales by W. H. Pugmire and Simon Strantzas exhibit figures who reveal strikingly Lovecraftian elements while probing the psyche of the man from Providence.

H. P. Lovecraft’s work has captured the imaginations of millions—and now he himself has become no less fascinating. In every sense of the word he was, as Vincent Starrett said of him, “his own most fantastic creation.”

Limited to 100 signed hardcovers signed by the contributors