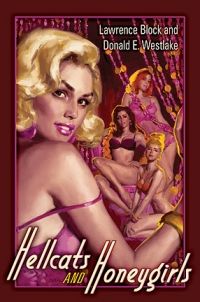 Subterranean Press is proud to publish an omnibus containing the three novels jointly written by Lawrence Block and Donald E. Westlake. The individual titles have out of print for nearly five decades.

“Now, as I write these lines, Don’s been gone a year and a week. And our three joint novels are now available in this handsome hardcover edition. I’m happy about this, and I can only hope that Don would be pleased as well.

I can’t be sure of that, as he hasn’t had any say in the matter. I do know that, in recent years, he became increasingly open about pseudonymous work that he’d previously kept in the dark. Part of this may have stemmed from a recognition of the inevitability of it all. There are people out there practicing a weird form of scholarship on the crap of which we who wrote it thought so little, and a quick search of the internet can unearth no end of information about our early work, some of which may even be true. The genie, alas, is out of the bottle, and the toothpaste is out of the tube. And, really, what difference does it make?

When Don agreed to have Hard Case Crime reissue some of his early books—crime novels, I should point out, which had nothing to apologize for—a mutual friend asked him why he thought this a good idea. The money didn’t amount to much, after all, and the work was not as good as what he’d produced since then, and—

So I don’t think it’s too great an abuse of our friendship that I’m shepherding these three books back into print.”
—Lawrence Block, from his Introduction