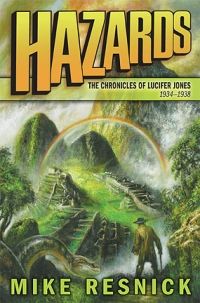 Lucifer Jones is back--and Subterranean’s got him!

After his Adventures in Africa, his Exploits in Asia, and his Encounters in Europe, everyone’s favorite man of the cloth is back to tell you about the Hazards he encounters in South America. They include the terrifying Island of Annoyed Souls, the discovery of the Lost Continent of Moo (spelled correctly for a change), a battle with safari ants that even Charlton Heston wouldn’t want any part of, and a pair of Bird Girls who live in matching Chartreuse Mansions.

You’ll meet some old friends such as Capturin’ Clyde Calhoun, old heartthrobs such the Scorpion Lady, old rivals such as Major Theodore Dobbins and Rupert Cornwall, an old nemesis (the remarkable Erich von Horst), a pair of naked high priestesses (or goddesses, take your choice), the sinister Dr. Mirbeau, the incredibly wealthy and incredibly undesirable Baroness Schimmelmetz, and a score of others–-including Bubbles, an anaconda with an attitude.

And making his way through these hazards is the irrepressible Right Reverend Honorable Doctor Lucifer Jones. So come along–you don’t want to miss the fun!