Six-foot-nine and four hundred pounds, hailing from parts unknown, he is the one-man walking gore-machine of the Deep South Wrestling Conference, and his name is...GOON ...

But police captain Philip Straker isn't a wrestling fan. The bodies pile up like dirty laundry: sex-obsessed tramps used as playthings by some unspeakable creature. Straker is determined to solve the rash of rape and mutilation murders with trimmings that beggar description. Is it just a coincidence, or do all the victims have something in common? ...GOON ... Investigative reporter Melinda Pierce will do anything to find out, by offering herself up as a sexual spittoon in order to infiltrate the arcane and lust-drenched warrens of backstage wrestling. There, in maloderous locker rooms and unsavory motels, she partakes in carnal forays so gross, so downright nasty, they'd make Linda Lovelace bend over and puke. All to track down...GOON ... This human juggernaut, this masked rack of guts, muscle, and mayhem... Is Goon just a wrestler gone insane? Or is he something hideously worse? Relentless as a Texas Deathmatch, GOON is a no-holds-barred festival of body slams and insatiable orgy, of pile-drivers and sexual grotesquerie, of neck-breakers, drop-kicks and more blood and guts than a fish market floor. It just might leave you down for the count... 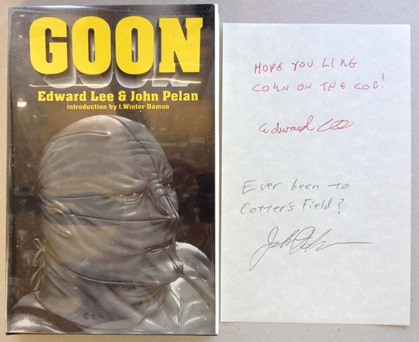 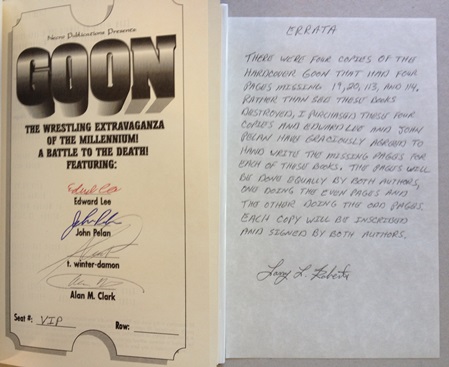 The Letter from Larry Roberts reads:
There were four copies of the hardcover Goon that had four pages missing 19, 20, 113 and 114.  Rather than see these books destroyed, I purchased these four copies and Edward Lee and John Pelan have graciously agreed to hand write the missing pages for each of these books.  The pages will be done equally by both authors, one doing the even pages and the other doing the odd pages. Each copy will be inscribed and signed by both authors.