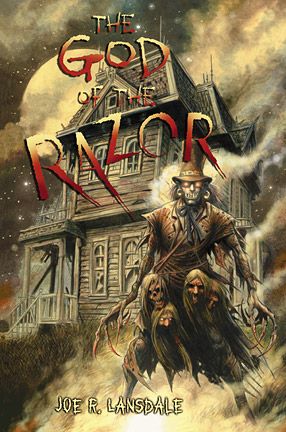 God of the Razor

The Nightrunners is considered by many to be one of the best horror/suspense novels to date.

It has had a passionate following for years. On its twentieth anniversary, Subterranean Press will release this novel as part of its Signature Series, in a volume that also contains stories that were inspired by, or drawn from, the novel while Lansdale waited for it to sell.

The novel and stories have influenced numerous writers over the years, and are now gathered for the first time (with a new, never-before-published tale) in this unique tribute volume celebrating one of the most influential and award-winning writers of the last two decades.

The God of the Razor will be designed as a companion volume to the Lansdale tribute anthology, Lords of the Razor, featuring a full color cover by Tim Truman, and twenty full page black-and-white illustrations for the short stories and novel by Glenn Chadborne.

Limited: Only 150 signed numbered copies housed in a red "demon skin" slipcase and SOLD OUT at the publisher