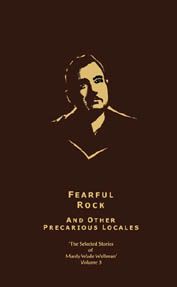 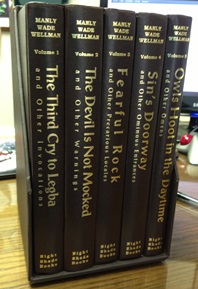 Volume 1 The Third Cry to Legba and Other Innovations is the 1st volme of the Night Shage Books' five volume "Selected Stories of Manly Wade Wellman." This Volume collects Wellman's John Thunstone and Lee Corbet stories. These stories (written between 1943 and 1979) combine the mystical and horrific with traditional southern folk tales and legends. At the same time, these stories reveal a post World War 2 modernism that make them much more then pulp romanticism. The paranoia and cynicism of modern weird icons such as the X-files may well have had their genesis in the pulp musings of Manly Wade Wellman. Indeed the intensely driven, idealistic occult investigator John Thunstone could be a pulp/noir stand in for Fox Mulder.

This work will be issued in a fine collector's hardcover state, with 24 illustrations. Edited by John Pelan, illustrated by Kenneth Waters.

Volume 2 The Devil is not Mocked and Other Warnings is the 2nd volume  of Night Shade Books’ five volume “Selected Stories of Manly Wade Wellman.”  Collecting all of Wellman's Appalachian fantasy stories.

Volume 3 Fearful Rock and Other Precarious Locales is the 3rd volume of Night Shade Books’ five volume “Selected Stories of Manly Wade Wellman.” This volume is made up of eight novella length stories. It reprints Wellman’s “Judge Pursivant” and “Sergeant Jaeger” stories, as well as a lost classic that has not been reprinted since its original publication in Strange Stories, in 1939. In addition, it features a introduction by Wellman’s long time friend, Stephen Jones, who provides a heartwarming bit of historical perspective on Wellman, and the influential shadow that his work as cast over the genre.

Volume 5 Owls Hoot in the Daytime & Other Omens is the 5th and final volume of Night Shade Books’ five volume “Selected Stories of Manly Wade Wellman.” This volume contains all of the John the Balladeer stories (sometimes better known as Silver John), Manly's most famous character. Owls Hoot will also contain a comprehensive Wellman bibliography.