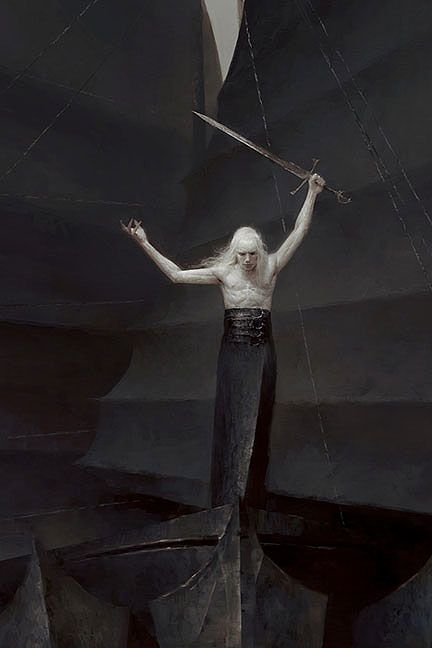 ELRIC OF MELNIBONE: Volumes 1, 2, 3, 4 and 5 w/rights to future volumes through us at published price.

Robert E. Howard’s Conan of Cimmeria is generally credited with starting the boom in heroic fantasy that began in the late 1920s and has been with us ever since. He spawned lots of imitators, lots and lots of imitators…
In any event, after thirty years of Thongors, Elaks, Kyriks, Duars, Donters, Braks, Whacks, Thugs and Thwacks, readers were sick of it. Somewhere along the way the writers (with the exception of the redoubtable Fritz Leiber) had forgotten all about the sorcery part of the equation, leaving the basic plot being the lumbering oaf facing off against the frail but far smarter and more powerful sorcerer, who in some act of hubris would manage to screw everything up and wind up with his head in a bag.
To save us all, a young man from England arrived on the scene in the rather unlikely place of the pages of John Carnell’s Science Fantasy. Michael Moorcock wrote stories about a character that, without his soul-drinking sword, was too weak to raise himself off the couch. Readers had never seen anything quite like the albino prince before and initially weren’t sure what to make of him. Playing on the theme of the Ultimate Outsider, Moorcock’s protagonist wasn’t even human in the strictest sense. By the time the second novella saw print the readership had made up their minds: they loved Elric!
Lancer Books brought out a two-volume set of Elric stories in 1967. One featured the novel Stormbringer, and the other book, Stealer of Souls, gathered up the short stories. More Elric work followed, such as The Sleeping Sorceress, The Weird of the White Wolf, and numerous other short stories, novellas and novels.
Now, for the first time, the titles, contents, and order of the Elric stories appear exactly as Michael Moorcock has long intended, making the Centipede Press editions (ultimately 9 volumes, with a tenth volume of archival artwork) the most definitive sets of these books ever made available.

These are archival editions, with gorgeous illustrations and featuring guest introductions from some of the top writers in the field. Each volume will be signed by the author, introducer and artists. This was the first three books consisting of the following

Finally! Elric of Melnibone makes his return in what will no doubt be acclaimed as one of the very best chapters in the saga of the doomed albino prince. While many of you may recall reading this installment in the series as The Vanishing Tower, Mr. Moorcock has made substantial alterations to the text, bringing it up to the quality that you have come to expect from the author who is certainly in the discussion as Britain’s greatest living fantasist. It’s true that at the time of original publication, fair claims could be made that Moorcock wrote many of the “fill-in-the-gaps” stories and novels in a tremendous hurry at the insistence of publishers who knew that they had a goldmine in Elric and weren’t entirely sure that the same degree of success was in the cards for Jerry Cornelius…
It has all worked out for the best; the intervening years have given Moorcock the opportunity to revise and shore up these additional pieces, (all of which take place before the events recounted in Stormbringer), and rather than the work being done by a writer in a tremendous hurry, trying to juggle the editing of the legendary magazine, New Worlds with the authoring of a great many new novels as a demanding publisher eager for more of their “sure thing” hung over his shoulder like so many vultures. We have the results of one of the greatest fantasists in the world applying his energies to carefully revise and rewrite these additions to the Elric series bringing them up to the highest possible level of quality.

This volume focuses mainly on Elric’s opposition to the Melnibonean sorcerer, Theleb Ka’arna, who on the surface does not initially appear to be a worthy opponent, however, it is Elric’s own self-absorption and angst that allows Theleb Ka’arna opportunities to both escape Elric’s rage and to catch him in traps that by all rights he should have avoided. Moorcock deftly utilizes Elric’s flaws in order to build page-turning suspense that is almost unique to the sword and sorcery genre. In much of the genre we expect the brawny (if not necessarily brainy) hero to somehow muddle along and by sheer luck as much as anything else defeat the much smarter sorcerer, usually done in by his own hubris. In the Elric saga, we are given a character as capable of wielding a powerful spell as he is adept at wielding the vampiric black blade, Stormbringer.
The contents page and other page spreads are shown below. The titles, contents, and order of the works appear, for the first time, exactly as Michael Moorcock has long intended, making these the most definitive sets of these books ever made available.
The Sleeping Sorceress includes the novel of the same name and two short stories: “The Singing Citdael” and “While the Gods Laugh.” It also has an introduction by Walter Mosley and new artwork by Tyler Jacobson.

INFORMATION ON THE SLEEPING SORCERESS

Book 5 The Revenge of the Rose